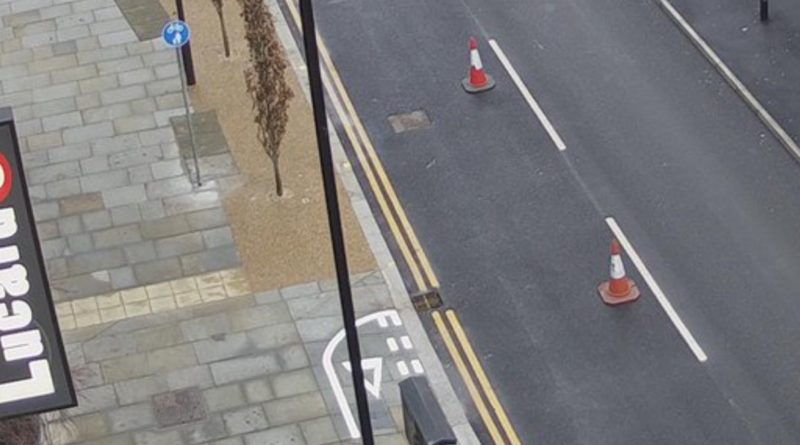 After a year of writing this a quick reminder of where you are on Active Travel measures and where they fit in the bigger picture. Nearly a year since May 01 2020 when BHAT first saw the Wallisdown Road West designs, the Holes Bay Crossing and Cabot lane schemes- all now well into building. May 09th Grant Shapps wrote to Councils to have them enact schemes for COVID Active Travel, then 27th the Money came to BCP under the U.A and a month later announcements went out about the Poole Quay and pedestrianization happened 27th June. Other measures quickly implemented elsewhere. A short summer of Government promotion of immediate Active Travel action in amongst the whole.

Youll be aware that the measures shown below were compulsory for Councils to make, some did a lot better than others and BCP bids were excellent in comparison, hence why they won good funds. Now these funds came in 2 pots, the first schemes and the end of the 6 months consultations are shown below, then the second tranche are at foot of this writing before the pictures. Why am I writing this? There is now a second tranche scheme being given consultation  at Whitecliff. Where have the results of consultations to the first tranche gone? what was the point of us promoting all these consultations with the current situation regarding what was the work given to Local Authority? It would be great to know.

Evening Hill protected lane, 14 JAN 2021 ? still in place ,and clearly of great benefit to all.

You can see the second tranche schemes information here.

No one is aware of whats about to happen other than potential Whitecliff work, perhaps Officers and designers, however they always as has been mentioned many times before have an ever revolving list of work subject to all sorts of external and internal pressures within the Authority, worst of all political ones completely outside of their actual job descriptions. Theres a good round up of how U.A did on applications to the DFT here, in comparison with other L.A’s. Last June was about the first time locally the terms Low Traffic Neighbourhoods had been mentioned, along with Modal Filters or sometimes known as Filtered Permeability, this was quickly leapt upon by the Christchurch Independents (formally Conservatives) and local rag who banded together to oppose any changes to roads citing usual misinformed cant about ‘loss of traffic flow’ etc.  Now theres public consultation going on for Whitecliff for next couple of weeks thats conflating TCF work on the comms, without any clue about what else might appear from the second tranche funding. You’ll notice having read this blog over a year the last administration communicated all works with a lot more transparency, now its difficult to know whats going on and with more funding than ever before given over to Active Travel this is difficult for those following and near impossible for the public. So Whitecliff and Baiter is being looked at by many people as I imagine the next actual TCF work will be when released at the end of the month. All sorts of forces like Natural England are having the say making ridiculous suggestions like cycleway by the waterside to lessen the impact of dogs on wading birds….. and more various groups that cant stand any idea of change. They are missing the facts of schemes like the one here which is the type of intervention that is being adopted in lots of places, most notably on Bristol Bath Cycleway, the first ever Sustrans distance track which was an old railway.

Personally Id just say all this reveals is this deep seated British confusion about itself, and dreams of what outdoors space is. As D.H Lawrence wrote encapsulating this suburban mentality that plagues any progress on travel, and will continue to do so as long as old, vested interests are dominant influences in BCP Council decision making ” The Englishman still likes to think of himself as a ‘cottager’ – ‘my home, my garden’. But is is puerile. Even the farm labourer today is psychologically a town bird. The English are town birds through and through, today, as the inevitable result of their complete industrialisation. Yet they dont know how to build a city, how to think of one, or how to even live in one. They are all suburban, pseudo-cottagey, and not one of them knows how to be truly urban”  (1920- from Nottingham and The Mining Country)

I guess Whitecliff just isnt ready for a segregated cycleway yet and wont be for a long time, shame it wont be us that suffer it will be our children and their children. 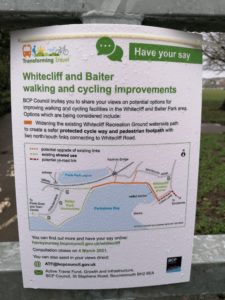 We have been consulted as stakeholders to all of the current stakeholder TCF meetings, which we can also publish our contributions to at the end of the month when the public consults appear online. With lots of evidence based contributions from studying whats happening around G.B – hope to be a good influence to have on designers, from a user perspective. Theres a couple of reasons to bring it up, firstly an example- Dunyeats Road work.     BHAT were engaged in the process right the way through this work, which was done in excellent time June/ July 2019. If you read closely youll find that design plans took the shared cycleway up the hill, past the school for a short distance an then stopped. One of the things we said at the time was this must link to existing Gravel Hill track, with some adjustments this indeed was included and without any fuss the link made to the building on the ground, that was good leadership from the Council. It might seem minor however there are gaps in how staff remote from location see the planning. Below is a picture of a desire line, where bikes regularly use. 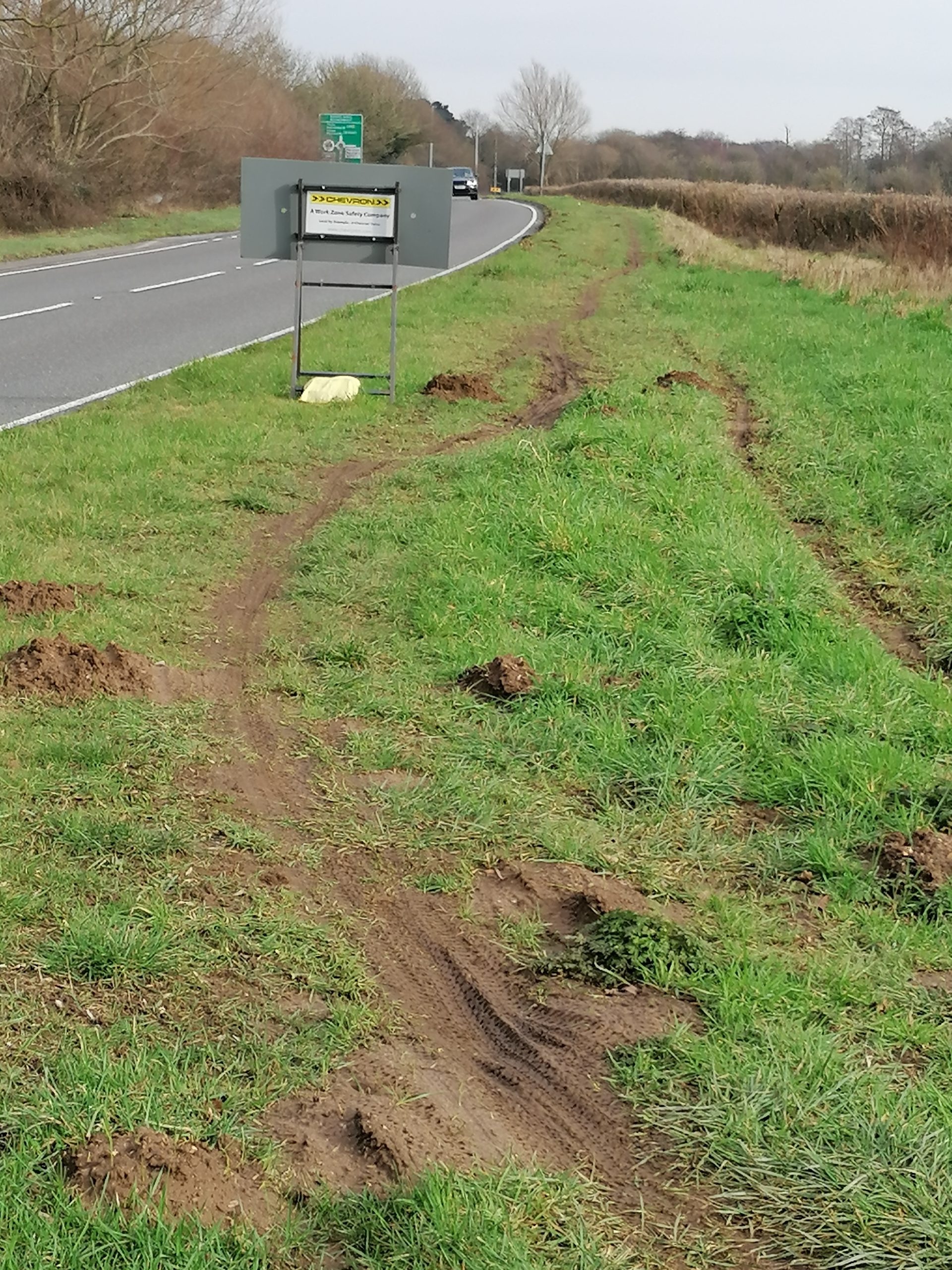 Its looking towards Bakers Arms Roundabout, and takes you from Organford minor road to the Sandford Road. Scheme C3 that is Poole to  Wareham ends near here emerging onto Sandford road, and when in conversation I asked about how Families from Organford or Sandford would get to Lychett Minster School?, and the Bakers Arms Roundabout safely, was informally told that its ‘not part of the scheme’ These are the sort of details that remote designers dont see, that would be not overlooked by more site visits and engagement with users. Every piece of upcoming work will still need looking closely at over next 3 years, if its to meet the aims of the funding and not be treated as single job engineering schemes, sexy bridge building etc. With all due credit to the staff  that do this all day every day, when the links arent made- youre just missing so many chances to actually give people chances to travel actively, and if its not made irresistible, Im afraid youll achieve no mode shift despite it all. We know that Council Officers are very well informed and have the absolute best interests of the residents at heart, its a shame some Cllrs dont.

Below you can see two photos of the same road in Manchester, one before and one after. I cant even bear to tell you how much this work cost- £ millions. Turning a major road into, a major road. Just like the Hunger Hill project that Engineers were so excited about, turning a massive gyratory into, a massive gyratory. Here (below) youve got 6 trees, a shared track and a tiny bikeway pocket . In 2021, Im not even making this up. So be suspicious of people proudly telling you they are doing lots of ‘Urban Realm’ changes, its more roads being wrapped in glitter. 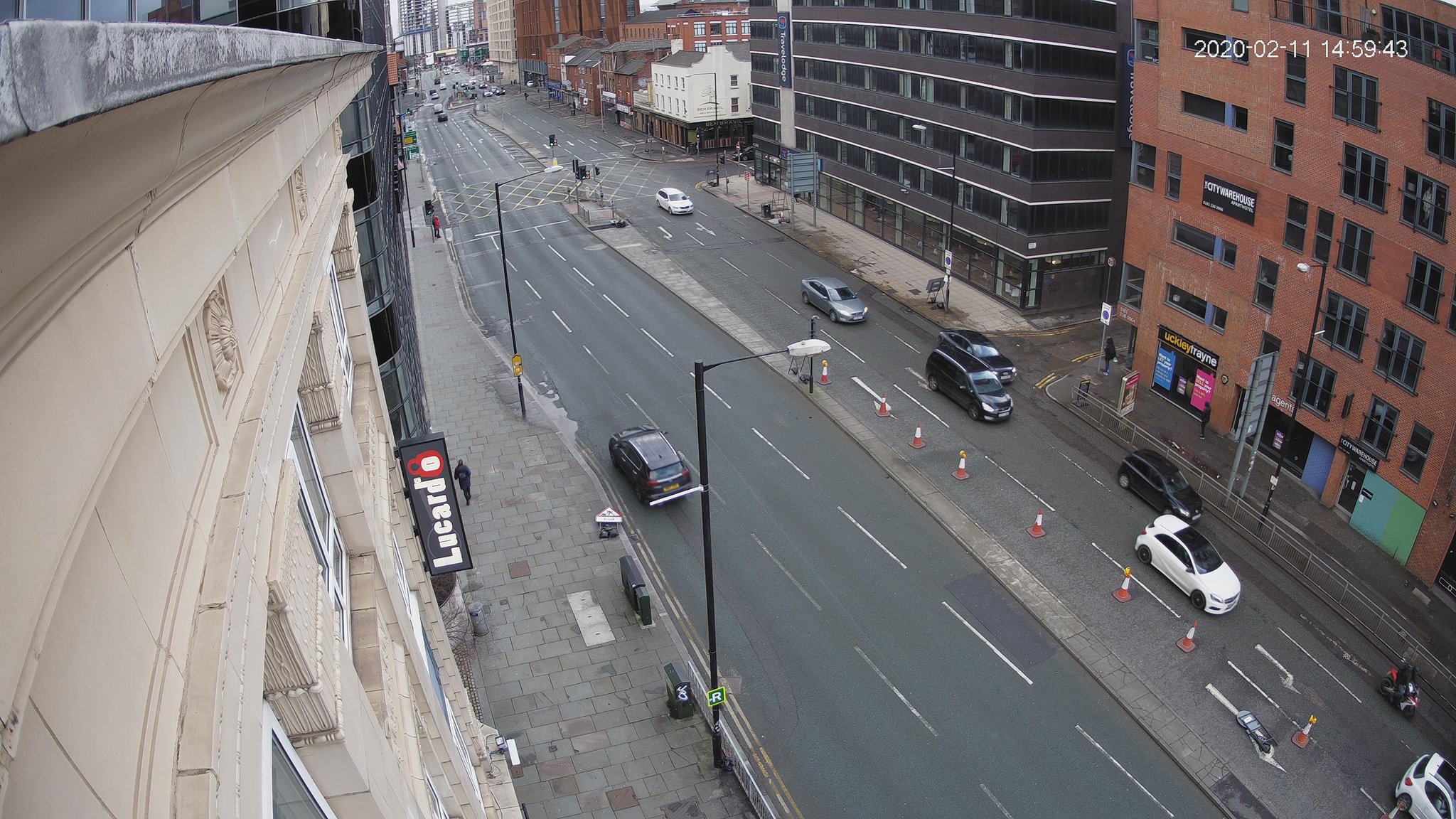 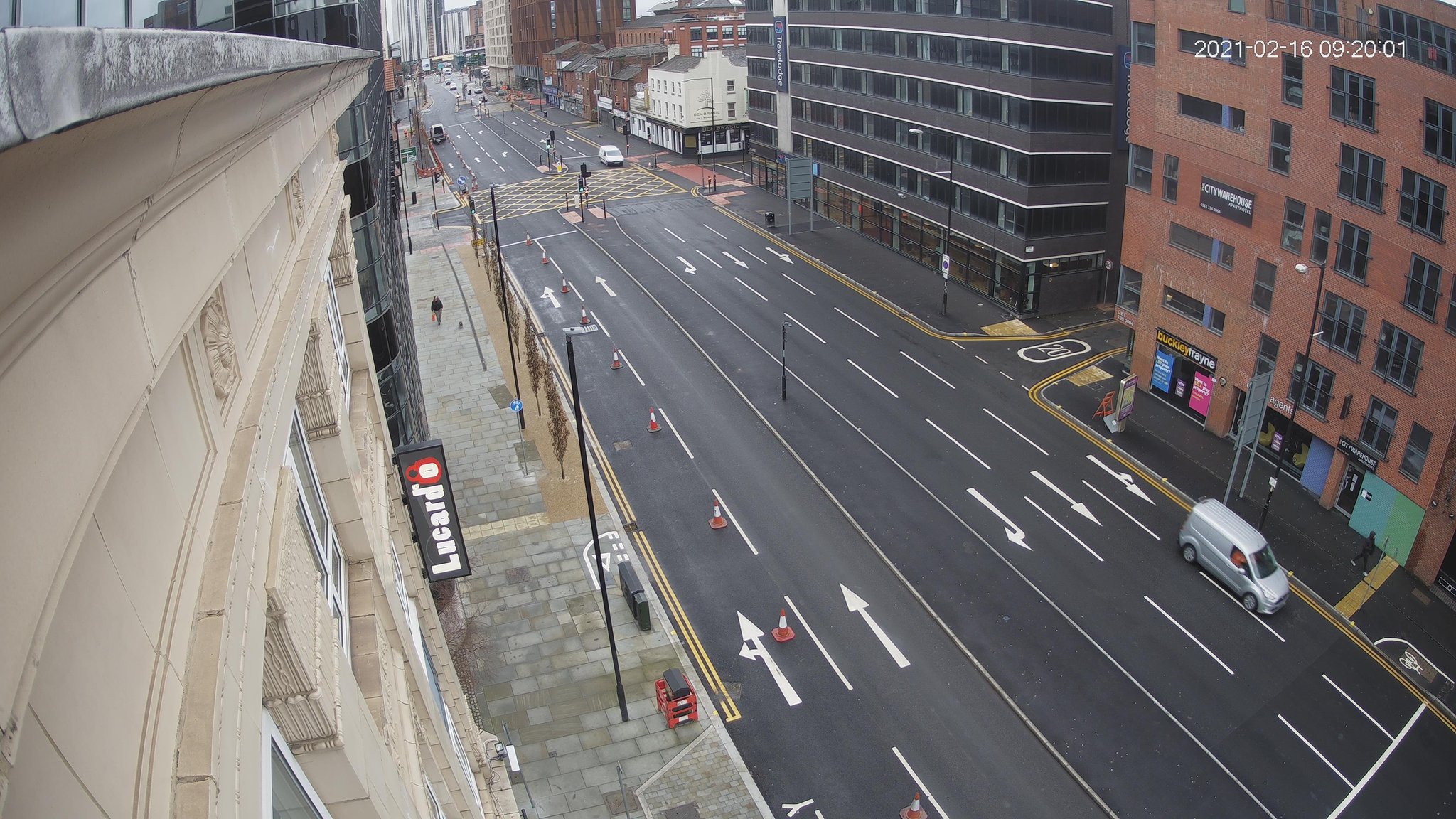 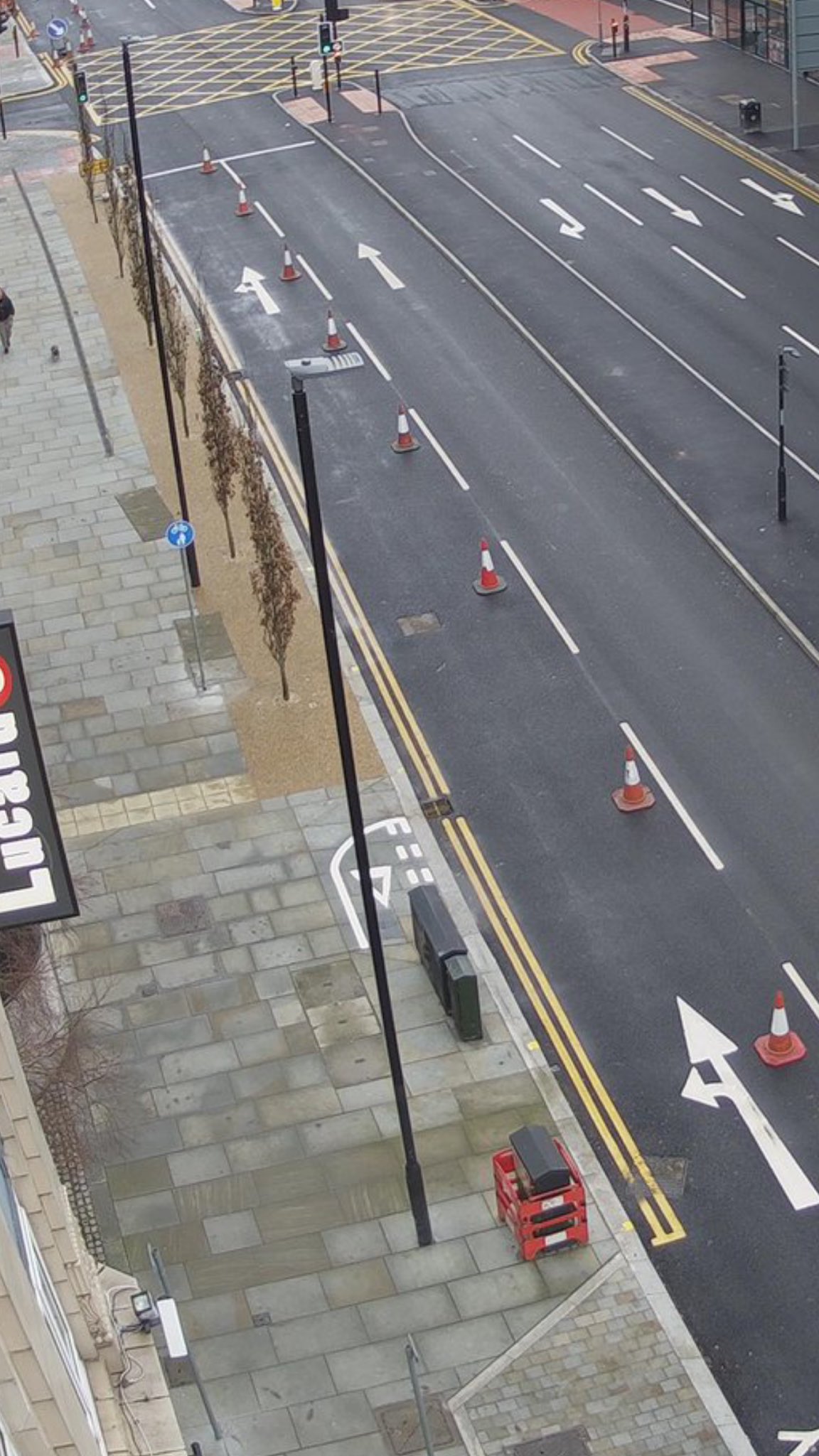 Youll remember the Lansdowne scheme? now being progressed with a through road remaining, this wont change the space significantly enough, yet it will be the first of the big schemes that some people cheerfully talk about ‘improving’  our built environment, except its like wrapping it in glitter, as the saying goes. Read about how here.

Finally just a thought about why U.K schemes fail. Youll have seen Chris Boardman talking about RBKC removal of an EATF  cycleway through Kensington, and how the Council there removed it despite all evidence? Its exactly the same situation as here in Keyhole Bridge near me, we demonstrated how local people actually feel about it, through asking you to contribute to double consultations. Problem is, the party in charge of the BCP Council are only really interested in maintaining power under the first past the post system, this means that they will only work on keeping the votes coming in from those people that will guarantee their continuation. Its a tiny majority of seats in BCP and these are the blue rinse generation Cllrs and voters that reached maturity in the 1960,s/ 70,s. So regardless of what you say to them, as long as locally and nationally, and within London Boroughs there is first past the post system of voting- unlike many European Countries that are making leaps and bounds progress on creating amazing neighbourhoods, and NOT proportional representation, where cross party decisions are made, then we are stuck with a tiny proportion making the wrong decisions, like removing Keyhole Bridge filter. Sounds a bit sad? what can you do? well you could get elected and try and change the broken system of Political status quo, or you could just lead by example, making active journeys, walking and cycling and being the change you want to see in the world- I always have.

Right thats enough from me, only another couple of blogs to make from the chair- we invite guest contributors, so all you budding writers, kerb nerds, designers, enthusiasts. Get in touch, thanks for reading.