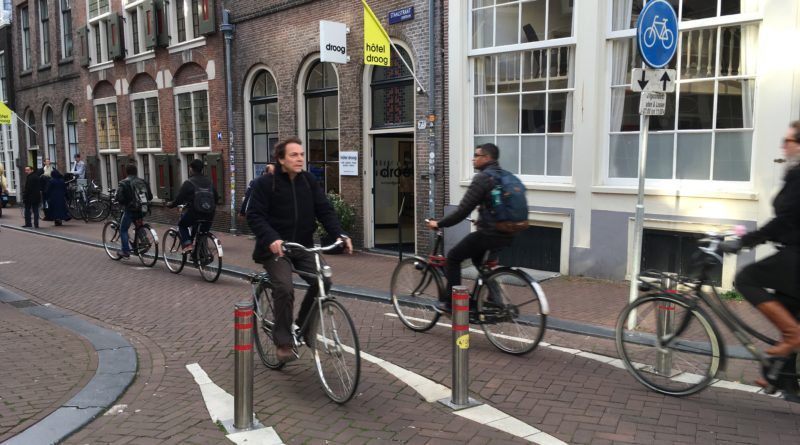 It’s a common enough argument that’s familiar to many of us: a new cycle lane or Low Traffic Neighbourhood (LTN) is dismissed because it’s only for ‘cyclists’. It’s not for ‘normal’ people. And because – so the argument goes – ‘cyclists’ are a tiny minority, it’s unfair and unreasonable to re-allocate road space for their benefit at the (supposed) expense of everyone else. This argument underpins a lot of opposition to schemes like the Evening Hill pop-up cycle lane and the changes on Victoria Park Road. But actually, pop-up cycle lanes, rat-run preventions, and LTNs aren’t really for ‘cyclists’ at all.

What do I mean by this?

Well, when people talk about cycle lanes and LTNs being for ‘cyclists’, they’re really saying that they’re being implemented for a very specific kind of person: those who wear ‘cycling clothing’, and who are mostly young, definitely fit, and probably male. And there is also a widespread belief that the cycle journeys this specific group of people are making are of low importance: for fitness, for leisure, or for competitive training. Maybe occasionally for commuting, but overall not the same as ‘proper’ journeys like shopping, working, or doing the school run.

Most of these stereotypes are misleading, though the ways in which they are misleading are probably best left for another time. But the key point here is the assumption held by many people that there is a pre-existing and identifiable group of ‘cyclists’, that this group is small and exclusive, and that only this group is going to benefit from something like a filter to stop cars rat-running on Leven Avenue.

But things like the Leven Avenue filter, or the Keyhole Bridge changes, or upgrading the Glenferness Avenue cycle lane, aren’t really for this small group of ‘cyclists’. In fact, they’re not really for someone like me – someone who already cycles for almost all of their journeys within BCP. Sure, I can still benefit from these changes. But I’m not really who this is all about.

Chris Boardman and Dame Sarah Storey made this point better than me in a letter they wrote to The Times this summer. Amongst other things, they pointed out that recent policy moves by the government to enable more people to use bicycles were not ‘about those who already cycle’:

To really make sense of this statement – that measures to enable cycling are not about those who already cycle – we first need to see beyond some of the widely held assumptions about cycling in the UK. The first of these assumptions is that ‘cyclists’ are a minority because only the very fit (and by implication, the young and non-disabled) can or will ride a bicycle for transport. The second assumption is that everyone who isn’t currently using bicycles to get around is using cars instead. And the third assumption is that only existing ‘cyclists’ benefit from these measures – and that therefore everyone who is not currently a ‘cyclist’ loses out.

But none of these things are true. Whilst cyclists are in a minority in terms of the number of people in the UK who regularly use a bicycle for transport, this is actually due to decades of transport planners and highways engineers designing our roads with only car use in mind – effectively designing-out safe and practical cycling use. In the hostile environment that has resulted, it’s no wonder only a few people feel able to head out on bicycles. But we know from other places that as soon as we meaningfully improve the conditions for cycling – so that people feel safe doing it and are attracted to doing it – more people start to use bicycles for at least some of their journeys. Moreover, when this happens we also see the diversity of ages, gender, and fitness levels of people using bicycles go right up.

Neither is it the case that people who don’t currently cycle necessarily drive instead: in fact, nearly 1 in 10 of all households in BCP have no car or van, and in areas such as Central Bournemouth and East Cliff that figure rises to 28%. In a few localised places the figure even reaches 43%. Furthermore, car and van ownership is not evenly distributed across genders, ages, incomes, or physical mobility: nearly one third of BCP residents who identified themselves as having medical conditions that limit their day-to-day activities live in households with no car or van, for example. (And whilst it won’t suit everyone, cycling can and does provide mobility for a diverse range of disabled people). This means that all those decades of only considering car users has in effect disproportionately disadvantaged all those people who don’t have access to a car or van.

This brings us neatly onto the third point: enabling more people to use bicycles for some of their journeys actually also helps people who aren’t using bicycles – including those who for whatever reason may never use them. In fact, enabling more bicycle use actually benefits people who have no choice but to use a car or a van, or take a bus. Because bicycles are so much more spatially efficient than cars and vans – they take up less space for moving a given amount of people or goods around – shifting some journeys to bikes frees up space for those who have to drive or use public transport. More journeys done by bike means less space taken up on roads, and more parking spaces kept free at destinations. It also means cleaner air and less carbon emissions. And to get these benefits, you don’t need to move everyone onto bikes. You don’t even need to move every journey a given person makes onto a bike. You just need a chunk of people to use a bike for a chunk of their journeys.

LTNs in particular also have direct and specific benefits for people not using bicycles. In fact LTNs really are mainly for people on foot, for children, and for people who use mobility aids – which at some point or other includes all of us. That’s because what LTNs do is make streets feel safer and more comfortable to move through and to be in. ‘Feeling safer’ and ‘more comfortable’ may seem like rather subjective reasons to pursue LTNs, but things like reduced noise from traffic and increased street interaction between neighbours all contribute to improved mental and physical health, as well as making our neighbourhoods better places to live.

Of course, LTNs do have benefits for people using bicycles as well. If you live in an LTN, the start of your journey by bike will feel more appealing because you won’t be heading straight out into an environment of rat running cars. Also, the sort of schemes involved in creating LTNs can also provide safe cycling links between areas otherwise severed from each other by heavy traffic. And whilst the LTN schemes we have in BCP are currently rather small, low in number, and isolated from each other, progressive development of multiple LTNs over a wider area eventually has the effect of linking up more neighbourhoods to each other for safe and comfortable cycle journeys. But these are only part of the benefits of LTNs; the overall benefits are things we can all experience even without ever getting on a bike.

So next time you hear someone opposing an LTN or bike lane on the basis that ‘its just for the minority who cycle’ , remember that these schemes are really for those who don’t currently cycle, and even for those who may never cycle.

David Fevyer is a local resident who mainly gets around BCP by bike and on foot. He has also recently completed an MSc in Transport Planning and Management at the University of Westminster. Follow him @davefev.