Anyone engaging with social media discussions about active travel recently is likely to have come across someone referring to LTN 1/20, usually in the context of how well designed a cycle lane is or should be. In fact, ‘LTN 1/20’ is increasingly referenced as a counter to people loudly claiming that existing cycle lanes are ‘good enough so why improve them’, or that recently improved cycle lanes are ‘too wide’, ‘too protected’, or even ‘too offensive to my car-blind sense of urban aesthetics’.

It’s basically a new document from the Department for Transport (DfT) that sets out standards expected of cycle infrastructure – cycle lanes, cycle networks, junctions, etc. The ‘LTN’ part has nothing to do with Low Traffic Neighbourhoods by the way; it just means it’s a ‘Local Transport Note’. The number ‘1’ means its the first one this year, and ’20’ means it was released in 2020. Simples. And on the face of it, not terribly exciting.

However, what LTN 1/20 does is set out what the DfT now thinks meaningful cycling infrastructure should look like, and in doing so it makes quite substantial leaps forward from the previous LTN 2/08 which it replaces. The document itself is obviously quite technical – you can download it for free here – but it sets out some key principles such as how wide cycle lanes should be, how junction designs should incorporate safe provision for people on bicycles, and the importance of putting all these bits together into a cycle network that is safe, simple, and appealing to use.

So why does this matter?

Aside from things like the width that a cycle lane should be – which is useful for countering complaints that the new protected Evening Hill lane is too wide, for example – perhaps one of the most important parts of LTN 1/20 is this table on page 33 that says where different types of cycle provision should be used.

What this table does is to allow anyone to look at a given road, look at the speed and amount of traffic, and identify what level of protection the DfT says should be provided for people using bicycles on it. The green indicates what is needed for the provision to be suitable for most people – you can think of this as what is needed to enable people who don’t currently cycle to start using bicycles for some of their journeys.  Anything in orange will exclude some users (the less confident, children, older people, people needing non-standard bicycles due to disabilities etc) and so won’t really enable people to switch to bikes. Pink is basically a no-no.

Literally anyone can use the table for this purpose – you don’t need to be an actual highways bod or transport specialist. And having done this, you can then write to your local councillor and MP saying ‘why doesn’t my road meet this standard? Why does what’s there currently exclude some people from being able to use bikes? And what are you going to do about it?’

You might be thinking ‘ok, but how do I know what the motor traffic flow is?’. Well, you can find some of this data for bigger roads from the DfT webpages: here are direct links for Bournemouth, and Poole (Christchurch is still included with Dorset), or you can browse the map directly. But in practice you don’t necessarily need to do this, because if the road is a 30mph road, the above table says that there should be a minimum of light segregation (like the Evening Hill wands, for example) irrespective of the motor traffic flow. Even on 20mph roads – of which there are precious few in BCP – the standard indicates that a lane of some kind is needed.

So that is what LTN 1/20 is, and one of the main reasons why it matters.  It’s important to note though that just because the DfT has published this – and in that sense this is now the national standard – it doesn’t mean anything will improve automatically. Standards themselves are not enough to ensure the improvements that they describe. Standards like this are used for all sorts of things on the roads, but none of them actually impose legal duties on councils or anyone else to implement them – the only legal duty a local authority has in respect of roads is to secure the ‘expeditious movement of traffic’. (Before anyone starts shouting that this means councils have to prioritise car movement, it does not: ‘traffic’ here means all traffic, including bicycles and pedestrians). So whilst LTN 1/20 can be regarded as the official DfT standard, the designs and guidance it contains won’t be implemented unless local authorities choose to follow it – or are encouraged by residents to follow it. And that’s the point of this post – because these things are in the standard, we can now use it to make the case for improvements based on solid and official best practice. We can also defend examples of good infrastructure from accusations that they haven’t been thought through properly, which is an increasingly common argument made by people opposing better quality and usable cycling infrastructure. In this sense, LTN 1/20 provides us with a solid base from which to ask, argue for, and rationalise better cycling provision for all.

David Fevyer is a local resident who mainly gets around BCP by bike and on foot. He has also recently completed an MSc in Transport Planning and Management at the University of Westminster. Follow him @davefev.

Chairmans note:-we undertook a survey last December 2019, on types of Cycleway that our members preferred, the results are all here. We were surprised that the overwhelming majority of users said that for Urban areas they wanted protected cycleways. Todays post just indicates that this is also the future of all new building in U.K. It starts with Wallisdown West scheme that is being discussed at full BCP meeting tommorrow, and you can read about it all here and see preliminary design at Point 6. 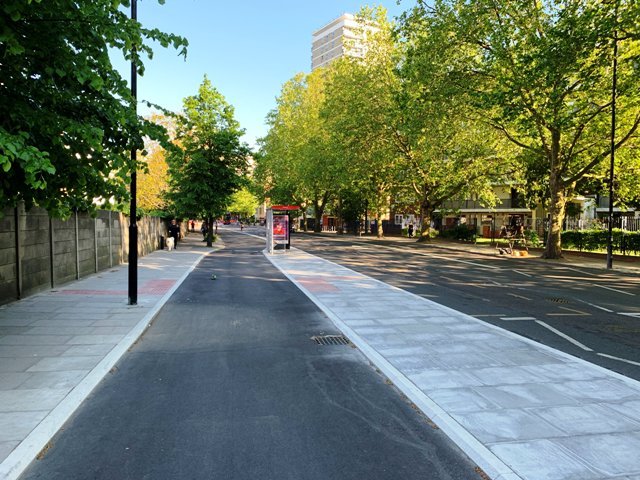