Good to see that John Grantham of The green TLC and Patrick Lockyer had a busy day last Saturday at Slades Park with around 40 people attending bike maintenance workshops. During the day people brought their own bikes and learned easy repairs like brakes, punctures, cables. Pat has decades of teaching bike mechanics to people and loves what he calls the ‘Dark Arts’ of bike fixing. As always there were  a few people that didn’t know about the first outdoor banked 250 metre Velodrome in England. This day was brought about by Active Dorset with Sport England funding, part of their work to engage the public in healthy activity, I was pleased to link The Green TLC with Active Dorset.  If you want to know more about The green TLC get in touch direct with John on 07886 888480 to hear how you can link with other households keen on making their weekly shops carbon –free and sustainable. 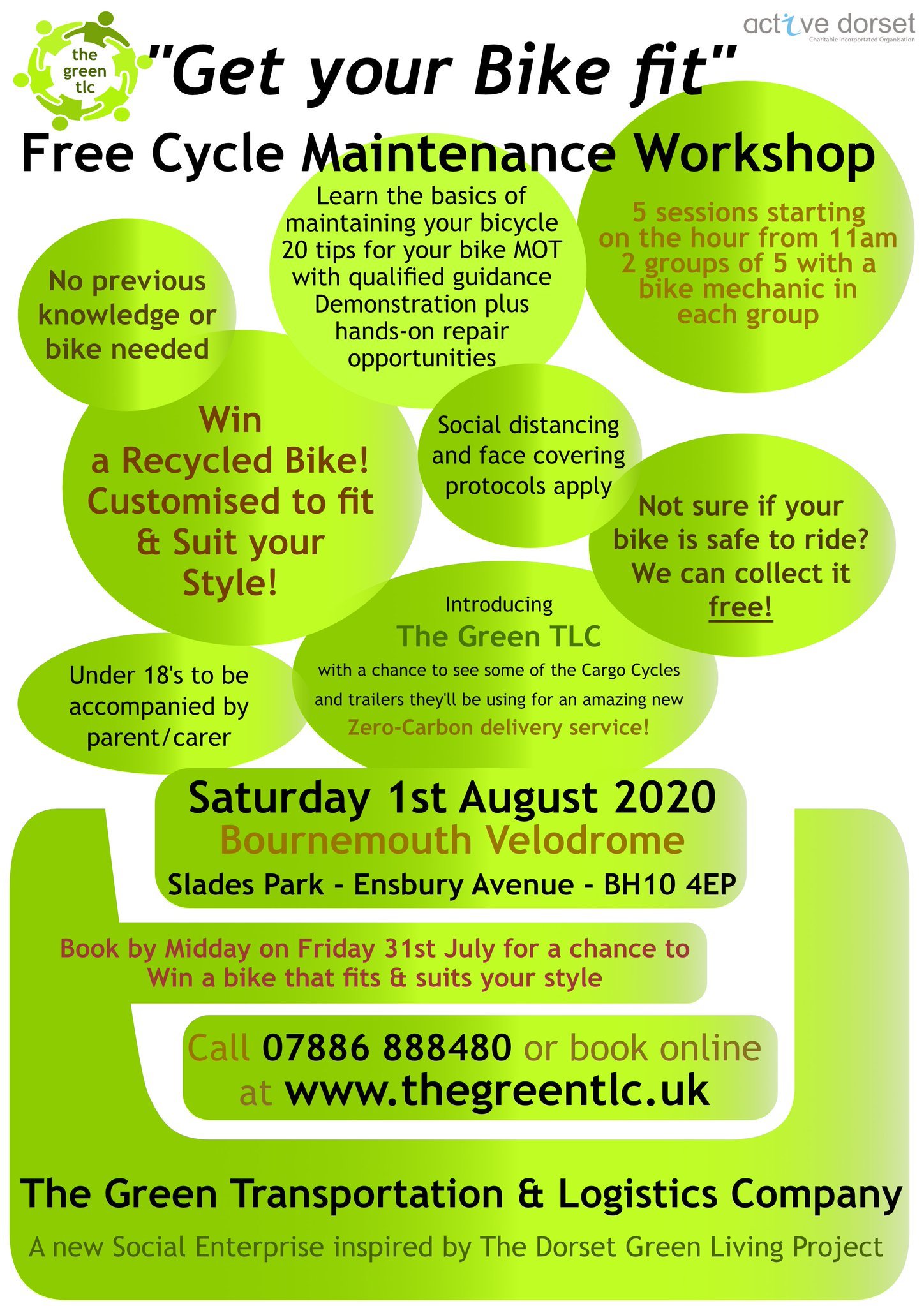 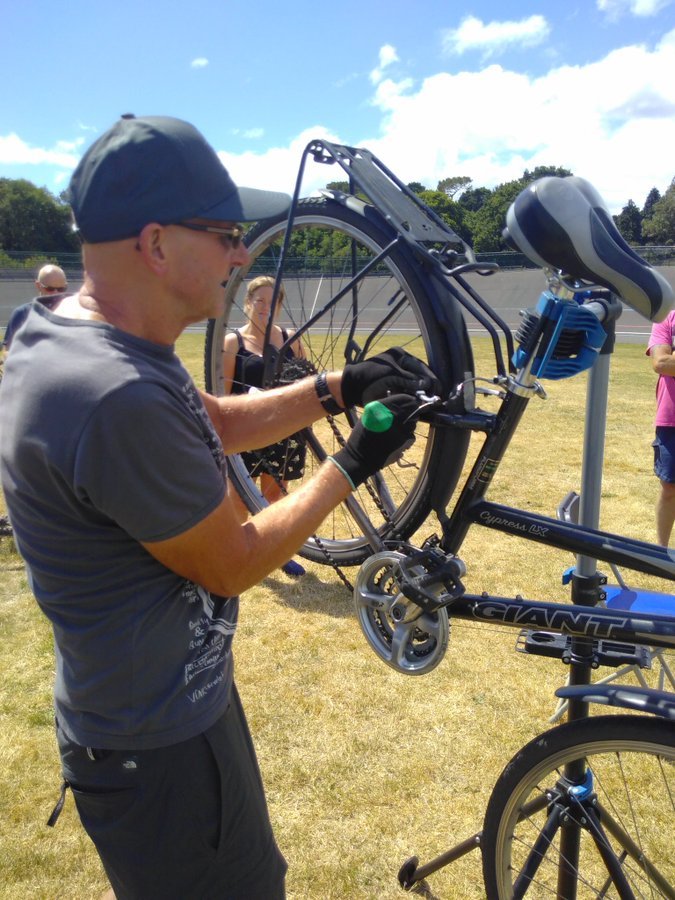 We have reached the end of the first tranche of funding for Emergency Measures for Active Travel in COVID era, an 8 week period. We have been reporting the changes made by BCP in previous posts and good to see they have some made some tangible changes- the Government specified that funds are dependent on proven infrastructure changes, and this will also apply to the second tranche of funds. Councils that proved they have the political will and backing to make changes apply on the 07th August for money to continue the work. Many Councils have struggled and been awarded half or less of the funds they applied for, which is sad but not unusual in a system that is always set up as a competition for funds, it would be much more efficient to provide constant capital funding. Dorset Council from Dorchester  have made a few changes for footway widening in Wimborne, and small re-prioritisation of Weymouth Quay roads but other than that nothing tangible to demonstrate. 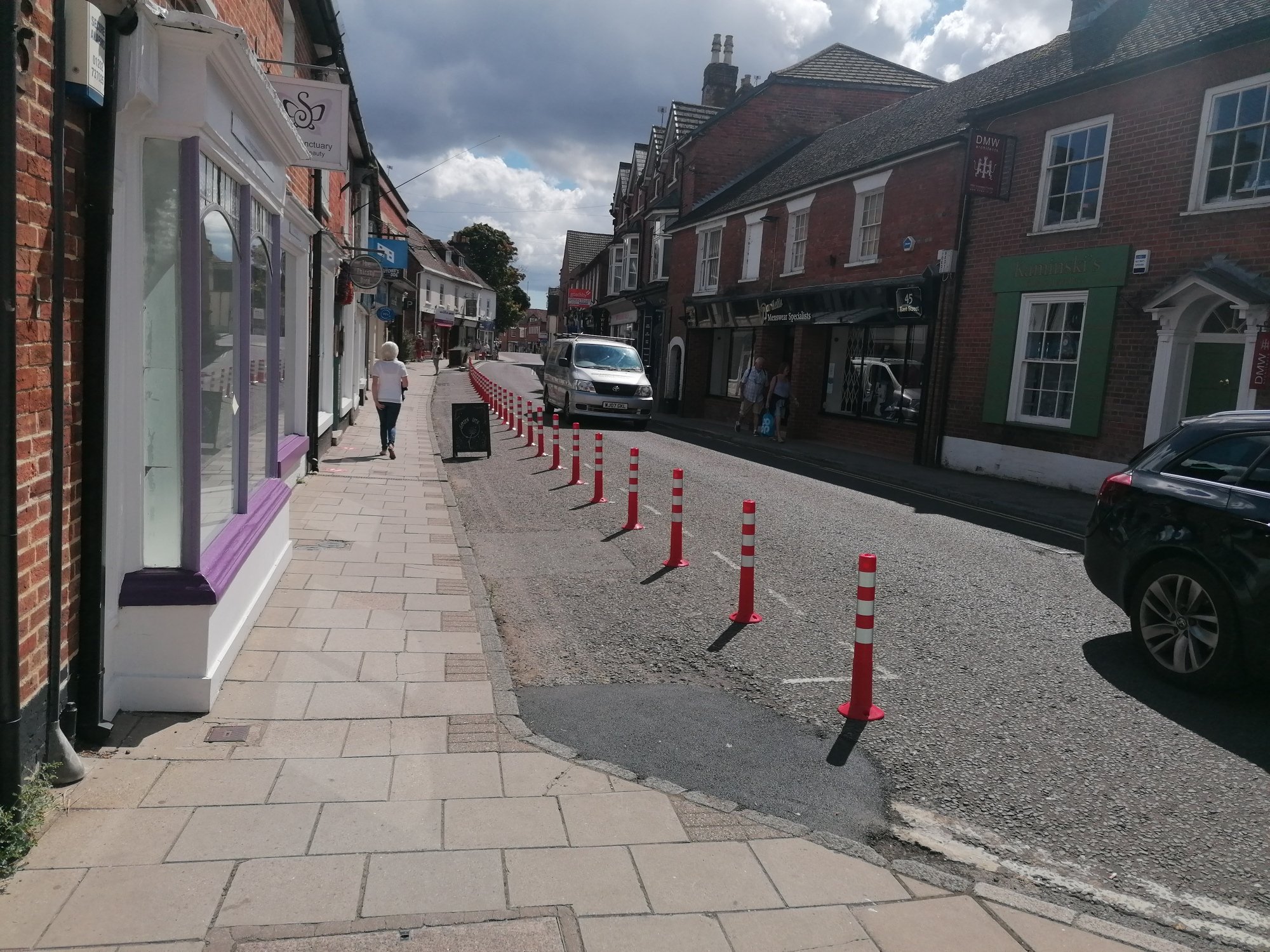 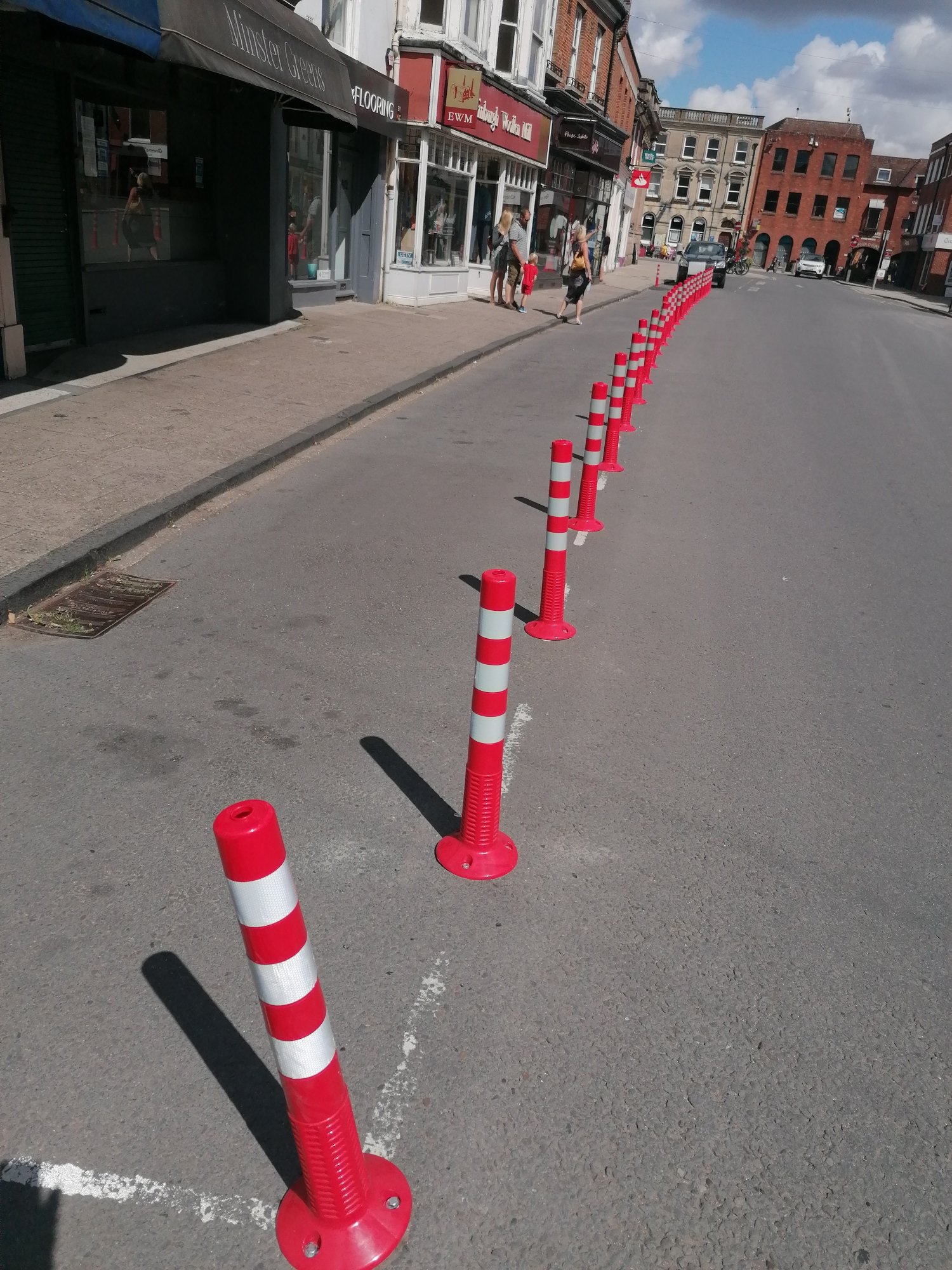 Its interesting to see that the first piece of work in BCP for footway widening on Ashley Road has now been taken down as restrictions on peoples movements are lessened.  With a very early start of paying for the consultation platform Commonplace 8 weeks ago –link-and yet knowing that funds were to be spent by the end of July when that very consultation ends, it will be interesting to see how thats explained.  I have so far received no replies from multiple submissions to that consultation. Engineers and Elected members in BCP have the foresight and vision to both win the funds for the area and see the implementation through which is truly to be congratulated. Talking of Elected Members, did you know that there are 7 principles of public life that they are all beholden to? In the Nolan Principle 1995. People entrusted with acting on behalf of the Council have a duty to enact the instructions of the ruling Government. 1995 wasnt that long ago, have a look at this-

1. The Seven Principles of Public Life

The Seven Principles of Public Life (also known as the Nolan Principles) apply to anyone who works as a public office-holder. This includes all those who are elected or appointed to public office, nationally and locally, and all people appointed to work in the Civil Service, local government, the police, courts and probation services, non-departmental public bodies (NDPBs), and in the health, education, social and care services. All public office-holders are both servants of the public and stewards of public resources. The principles also apply to all those in other sectors delivering public services.

Holders of public office should act solely in terms of the public interest.

Holders of public office must avoid placing themselves under any obligation to people or organisations that might try inappropriately to influence them in their work. They should not act or take decisions in order to gain financial or other material benefits for themselves, their family, or their friends. They must declare and resolve any interests and relationships.

Holders of public office must act and take decisions impartially, fairly and on merit, using the best evidence and without discrimination or bias.

Holders of public office are accountable to the public for their decisions and actions and must submit themselves to the scrutiny necessary to ensure this.

Holders of public office should act and take decisions in an open and transparent manner. Information should not be withheld from the public unless there are clear and lawful reasons for so doing.

Holders of public office should be truthful.

Holders of public office should exhibit these principles in their own behaviour. They should actively promote and robustly support the principles and be willing to challenge poor behaviour wherever it occurs.

So its disappointing to see local Conservatives rounding on their own administration as they are at present, about every single piece of work being done. Its impossible for people working as Ward Councillors and enjoying the benefits of expenses etc to know what a everything a large Organisation is doing – so they are given briefings together of upcoming work. For them to immediately contact the local press and start a personal challenge just shows how out of touch they are with National developments, just because something has always been done the same way within their street dosent mean that things should never change. Local press mediation relies on this sad, repetitive model of them vs us regardless of whatever the changes to be made are. Funny how if I create any provocation local paper and radio are straight onto me about it, whilst when I’m promoting the Councils work its total silence, strange that, the way the media works in U.K is sickening actually. This bikelash is happening  all over the U.K now by fearful Cllrs those that haven’t got a longer term view and really don’t have an interest in a more healthy active population. You might receive weasel words of support from these people but they don’t have the intestinal fortitude to stand for change. So the week gone by has seen lots of public announcements, the much requested LTN for design has gone to Officers. 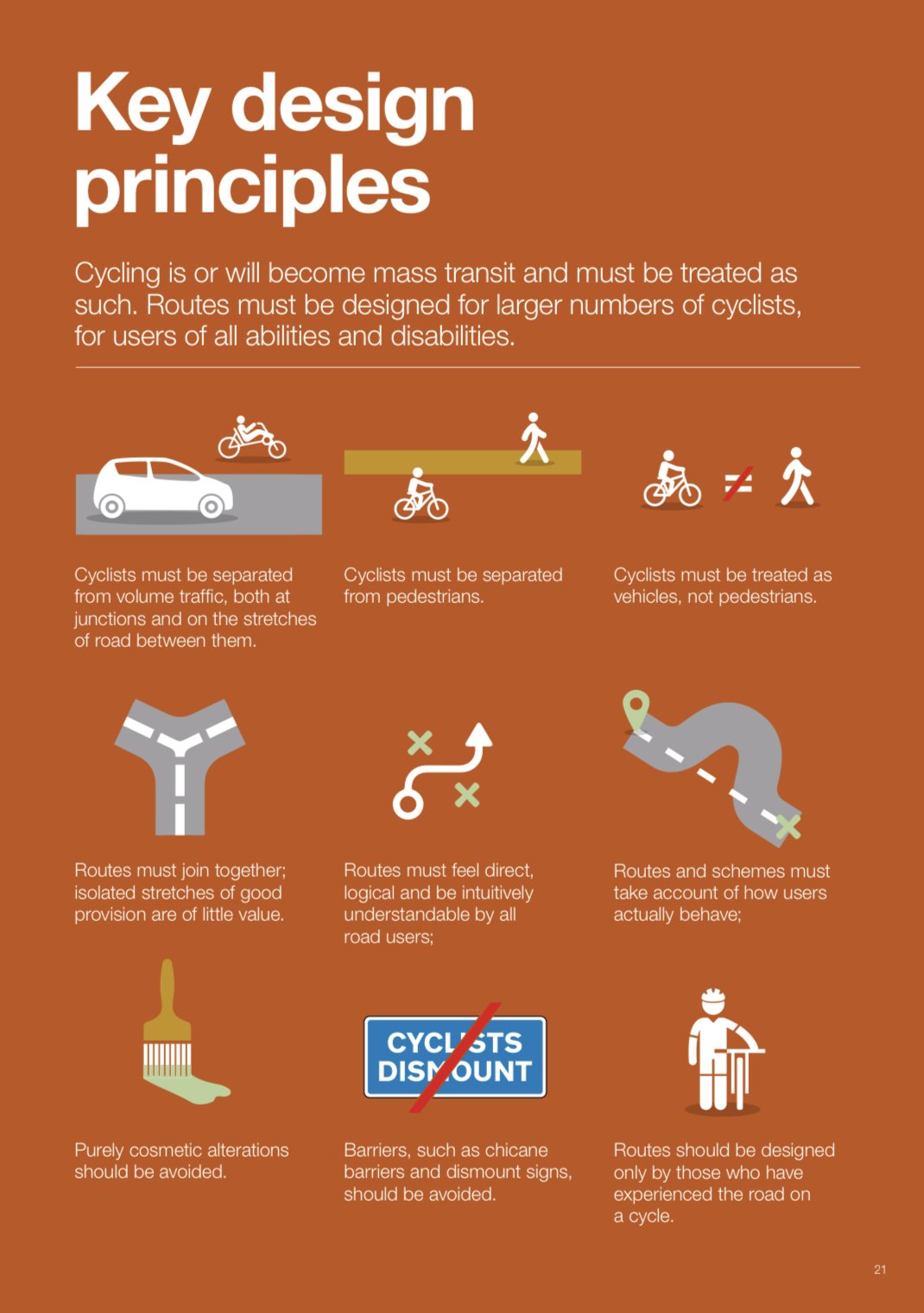 As has an update of the Highway Code.

In regard to this whole era we are living through Ive been reflecting whilst away.  The great LCC campaigner Oliver Schick and I once spoke about how Culture change goes through 4 stages, and it illustrates the stage I feel we have reached now in U.K. related to current COVID era Transport changes. Briefly-if we accept that Culture is what people do:- the ideas, customs and social behaviour of a particular people or society (U.K)Then we can observe 4 stages. Honeymoon, this is where something is new to people, you might compare it to having a bike as a child, just always completely happy with something innocently- doing something new.  Active Travel has been my life and so its always been a natural choice for me, the common sense of making short journeys by bike. I suppose only represented by me becoming an activist in the early 2000’s, when I began working outdoors. Then we move to frustration/ negotiation second stage where there may be a homesickness, or depression about things not being the same as what they felt like before. This represents up to about 2005 when U.K really wasn’t doing anything on transport changes, and those that worked within Councils and Charities were really outliers, pushing against the norm and having little influence, a minority of people doing something and persevering with it. Involving constant public education and trying to normalise what makes complete sense. Thirdly you move into adjustment stage, this is where we suffer the changes and start to adapt, pick up on new ways of being and acting. After about 2005 bike transport was being seen more regularly, and promoted more widely, charity rides became a standard acceptable thing. We could see this COVID era as this third stage now, many more people in U.K have tried and enjoyed travelling actively. We can see the benefits but are still becoming familiar with the idea. Moves have been made by lots of Organisations, even Sport bodies like British Cycling who existed previously to win medals for G.B made inclusion of Active Travel. G.B Government make very visible campaigns in league with the educators, like last Tuesdays announcement by the Prime Minister and people are fully aware of how progressive countries look, and have seen tangible moves made to start it happening here. There will still be about 52% stuck in the second stage. Then finally the fourth stage of acceptance/ adaptation is where those changes have become embedded. Europeans when asked about Active Travel don’t even notice they are doing it, the built environment naturalises it, Cities have erased the practice of using vast spaces to store stationary personal cars all day. There was another blog written here about where we are with current era– a great summary of why we should be cautiously optimistic about 2020. Sometimes it takes crisis to make anything change, you have to carry people with you if welcoming changes so if you are leading by your actions already- Keep it up. You will be pleased to hear there are staff working on analysing the consultations to BCP road changes like Evening Hill, all this will be used later this year to demonstrate how the outcomes of Emergency Active Travel measures were worthwhile. LTN notices are starting to appear and more incremental change is happening to the roads every day.

Suns shining, get on your bike like David. Cycle to work day 06th August, its will probably be dry, like it is most of the year.