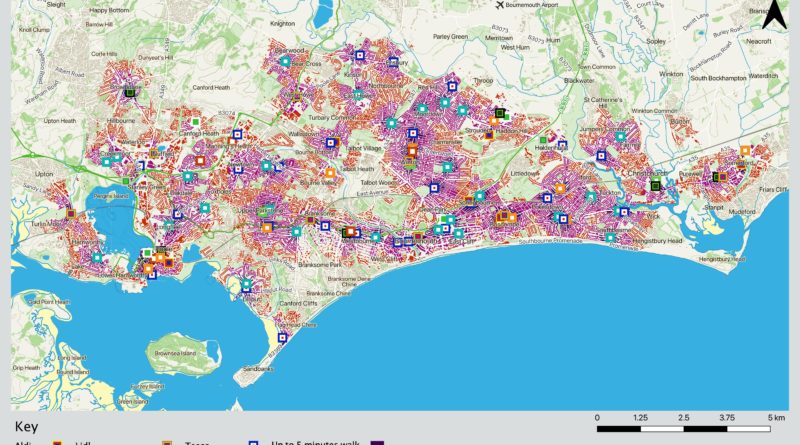 Several things to share today, Here is the Link to add comments and support to the Evening Hill work, Now youve done that- the map below came to me via the magic of twitter from a student in Oxford- thanks to William Ray. Hes interested in georeferencing and as its a map which is my livelihood wanted to share. You can see the supermarkets are coloured individually it gives you an idea of the distribution across BH area- and how far these places actually are away from homes. Theres a couple of sections that have large distance to travel- but in the main up to 15 minutes walk, and for many areas much less walking. For many who dont have access to a car the upcoming work of all councils to enable walking will become increasingly important. We are working with BCP to present details of the latest local travel survey,  with the equalities breakdown shown soon. Anyway I like to show here how short distances actually are and easy it actually is to choose active journeys 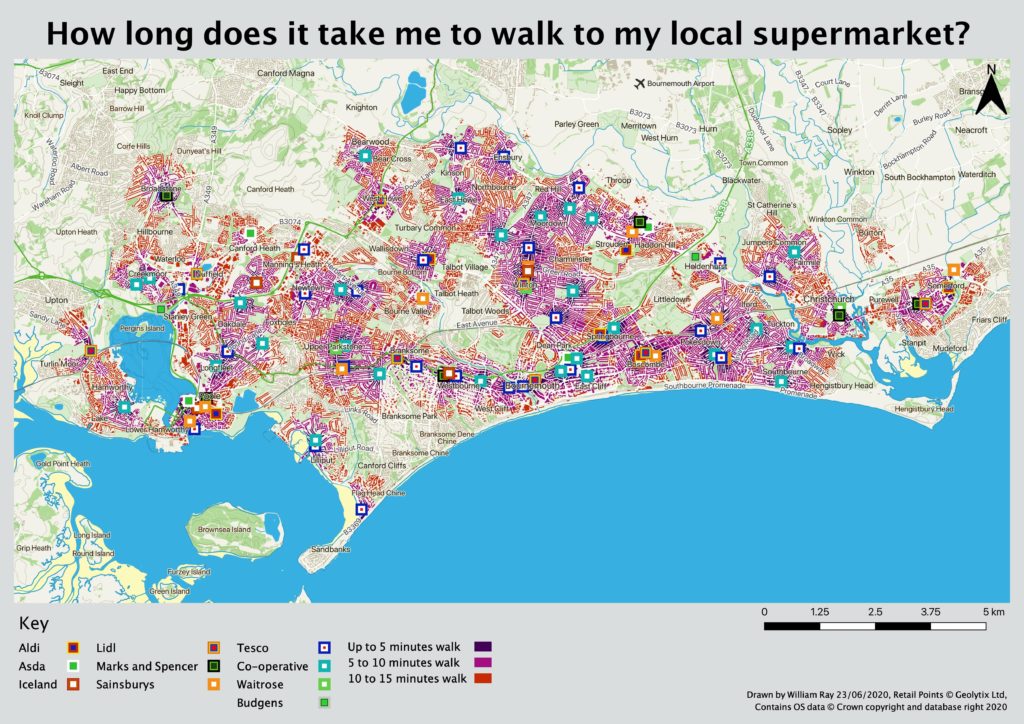 Moving on this covers much of the last post I made about current work of the Council feeding into longer term changes. Its biased because it covers an issue where I live and so I’m passionate about. Despite not being on the upcoming TCF routes, this mile section of track is one of the most heavily used places in the conurbation, for both leisure and commuting. Talking to people on the track as I have been for 2 years now, as part of my Sustrans work reveals the same concerns from almost every person. Contestation- every user on a linear track that isnt big enough. You can go there any day and photograph the before picture, and the after picture is my answer. Thanks to Marc Lohez for the photoshopping. This idea is a while off having the  funds to build it, however it dosent hurt to contribute and Im pleased to say Cllrs have recieved positively. If youre informed on the topic, the responses below were from leading U.K campaigners and locals . If you like it and agree, give it a share.

“Splendid solution, would be a huge improvement. Pretty much guaranteed to have conflict any time I use by bike. Dogs in & out of water always a hazard, as are pedestrians who consider cyclists have zero rights using it. Often avoid now which is tragic as it’s a great in/out route”

“Does it come in Dutch Salmon? 🙂 Seriously though, this could be an important link in a safe and attractive route between Poole Bridge/Quay and Sandbanks Ferry. I currently avoid it due to conflicts, but alternatives create issues due to railway line severance.”

“That would be great. Lots of conflicts between joggers, cyclists, dog walkers & out of control dogs. Was cycling along that path, stopped because a small dog was running around on the path & I was being careful. Got a mouthful of abuse & told I had loads of room on the grass.”

“Looks great, easy enough to achieve from Turks Lane round to the slipway, gets a bit trickier at that point due to the car park. Easier again after the car park, until you get to the really narrow bit – although I usually go onto the road at that point (if I haven’t already)”

“It’s spot on; the central zone could even manage the surface water”

“Nice. I like the term “parallel alignment” for this kind of design (rather than “segregated”!)”

“I like it. It looks like the New Malden to Raynes Park route in Kingston if you need an example.”

“I was halfway through typing exactly the same thing but Brian’s fingers were faster! My only comment is perhaps you could lose some of the paint.”

Now onto the weeks live topic- Evening Hill. I wrote about this prospect when first asked about it on April 16th, 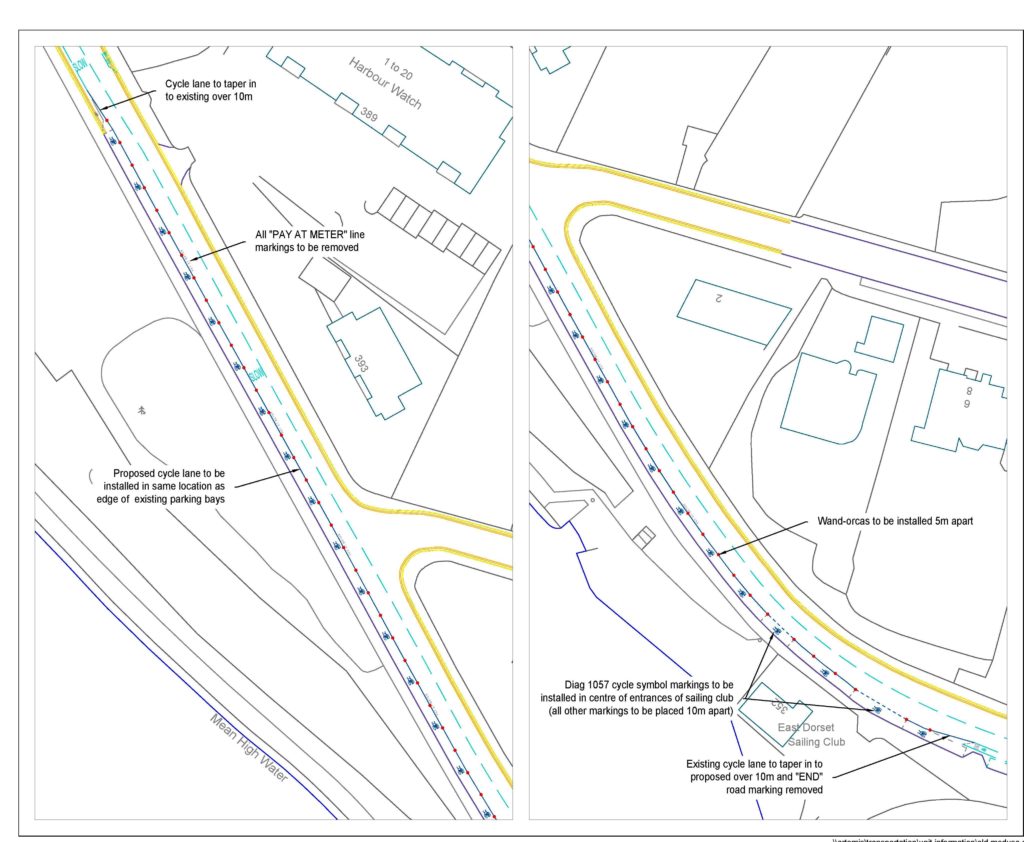 Obviously BHAT are in complete support of this, the first of many such actions in our area- this one suggested 14 weeks ago, long before any of the currently opposing voices were engaged in this subject.

Well lets have a recap, now after 15 weeks of ‘lockdown’ our first individual scheme which claims road space from stationary vehicles. Reminder- 9 weeks ago- the Conservative Gvt Transport Minister Grant Shapps gave, 9 weeks ago this advice to Councils

There are loads of posts on this website about the topic, unlike anything else on roads and transport this award comes with clauses, Councils have to act now to prove they are using the funds, and if youve been following this there is a second tranche of funding coming- which BCP officers won by quality bids, unlike many other Authorities. All Councils will struggle to spend this and if you think about it, are likely to be all trying to obtain the equipment at the same time to implement it as well. Unfortunately the U.K perception now 9 weeks after the measures were spearheaded is that COVID is over, so anyone uninformed as to these facts about Emergency Active Travel Funding means nothing. 6 weeks ago we were advised to start using the Widenmypath informal consultation tool. Many people before last week hadnt heard of it, however now its unfortunately now been hijacked by single click users that are being provoked into objecting to the scheme. Even more sadly is the fact the objecting names that appear are local Cllrs and all Conservative, almost as if they are still smarting from the recent failure of their sad Vote of no confidence in BCP Council, and will use anything our Authority do to try and ‘win’ back power. If you want to read about another area, Devon where Local Cllrs who are elected Tory members have scuppered all of its own Council Officers work, go ahead. Things like this are happening all over U.K. Very, very backward thinking. I’ve been advising BCP to have a full time liason Officer for all these upcoming schemes, whereby business’ and residents can voice concerns and see what could be worked out before implementation. What makes this change harder for people to understand is that it dosent fall into the normal pattern of consultation- it has to be delivered, as I’ve mentioned already the removal of the parking on the hill at Evening Hill is 10 years in the making, and successive advisors, and active travel advocates over the years have always failed to succeed on this- simply because, the storage of private vehicles on public roads in U.K is only just being curtailed by COVID measures aimed at providing more space for cycling. Unfortunate that the entitlement culture runs so deep in this country, and the attitude that leaving my own vehicle parked empty on public roads is of more priority to moving all types of users, drivers, cyclists and pedestrians safely through a section of road.

Heres who this is for in the picture:- they are colleagues, friends and their children, people walking on the footway, drivers who dont want to be stressed about interacting with bikes, in fact everyone. If youve been anywhere else in the world, you will have already seen Cities that have made Active Travel the automatic choice, perhaps those were in Europe, Miles ahead of U.K. Heres the first example of what will be an even better BCP. 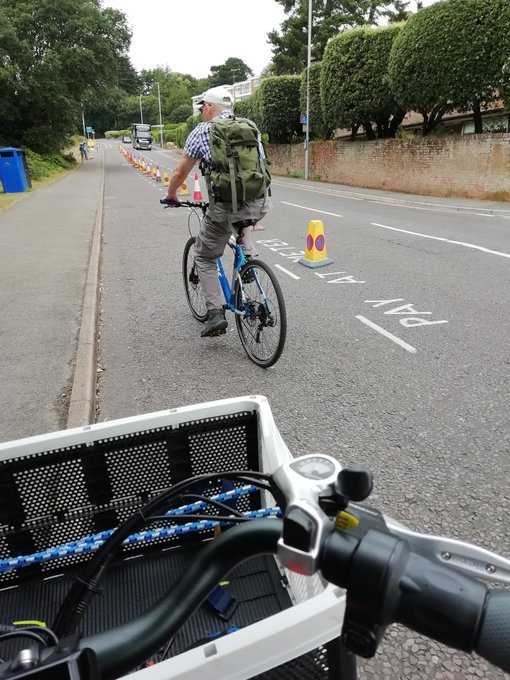 (Yes, Its a shame that on the top of the hill the cliff is falling away and users are going to be back in the lane for a section too) 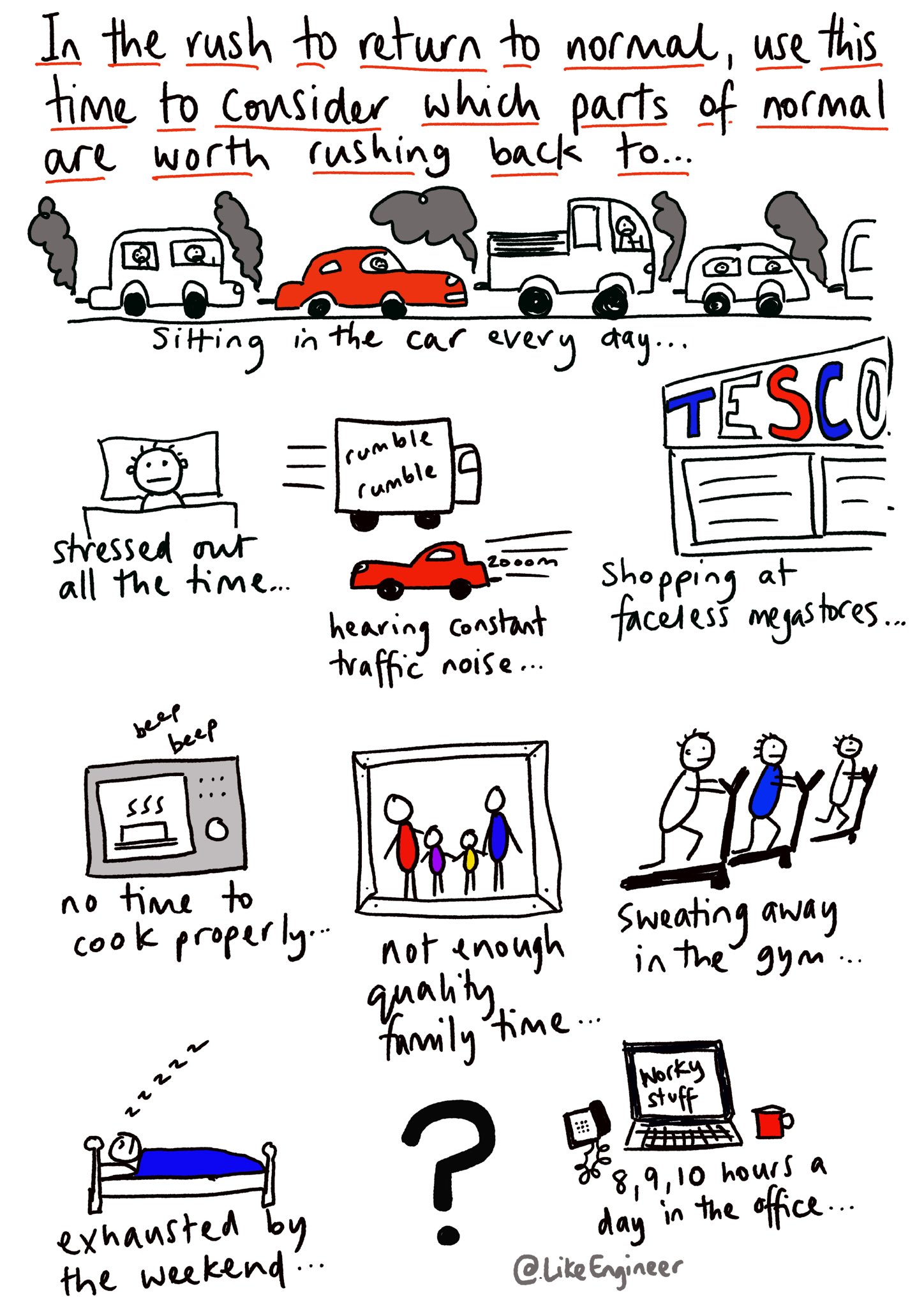