Todays post I’m featuring another of our partner groups, Dorset Cycling Network, established in 1992. Scroll down for a piece from Dr Adrian Dawson.

Firstly some local news. You may have been aware of some BCP footway widening announced on May 11th, first section opened on 21st May at Ashley Road near me. It doubles as cycleway past the shop, the photos here show how the lane has been singled to allow more space for walkers and cyclists. I was contacted by the Solent BBC Radio to talk about this yesterday however was having a phone holiday as the Media is reaching the bottom of the barrel at present so missed their request to speak today on the radio. It seems like a great start to me, let us know what you think. 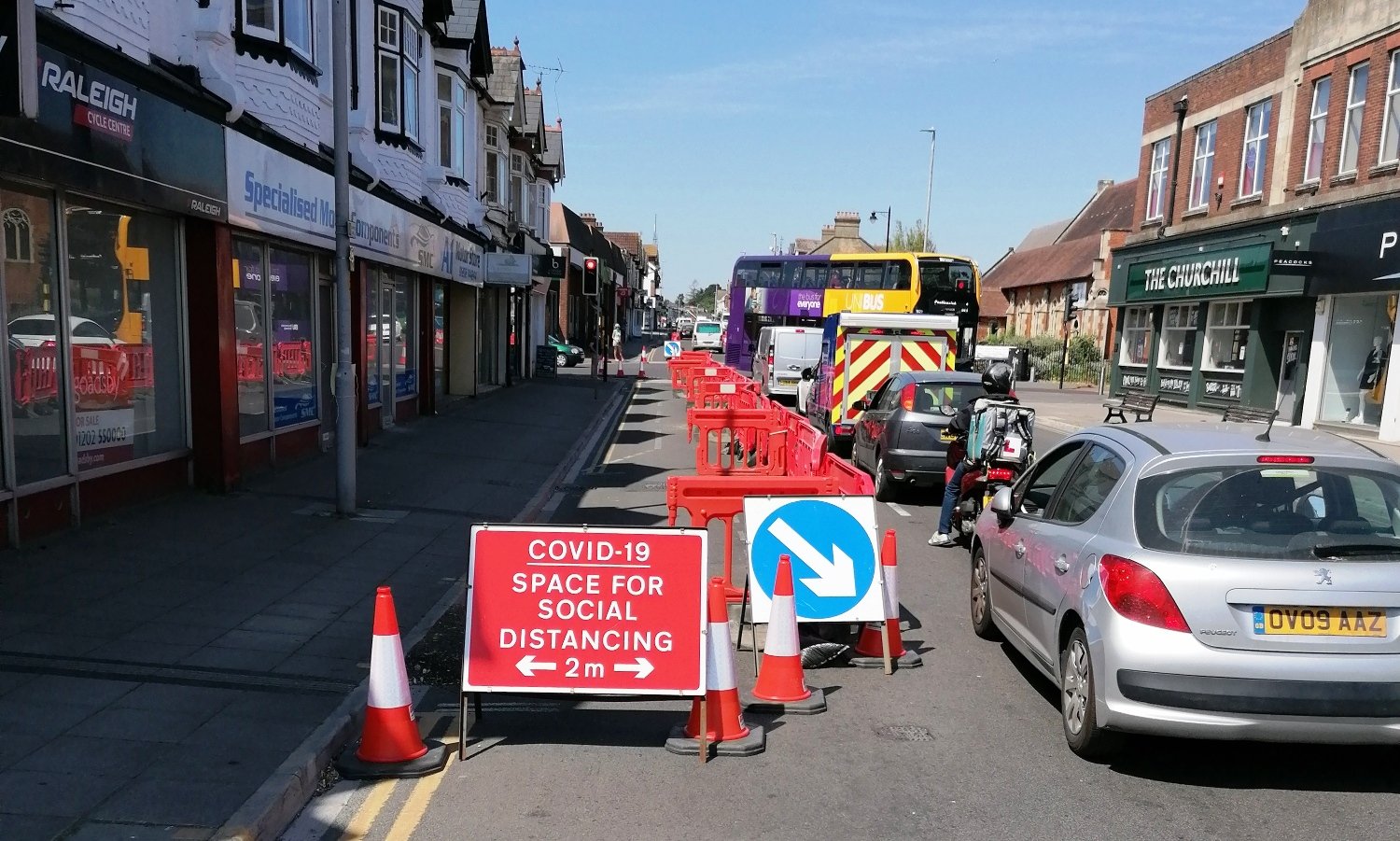 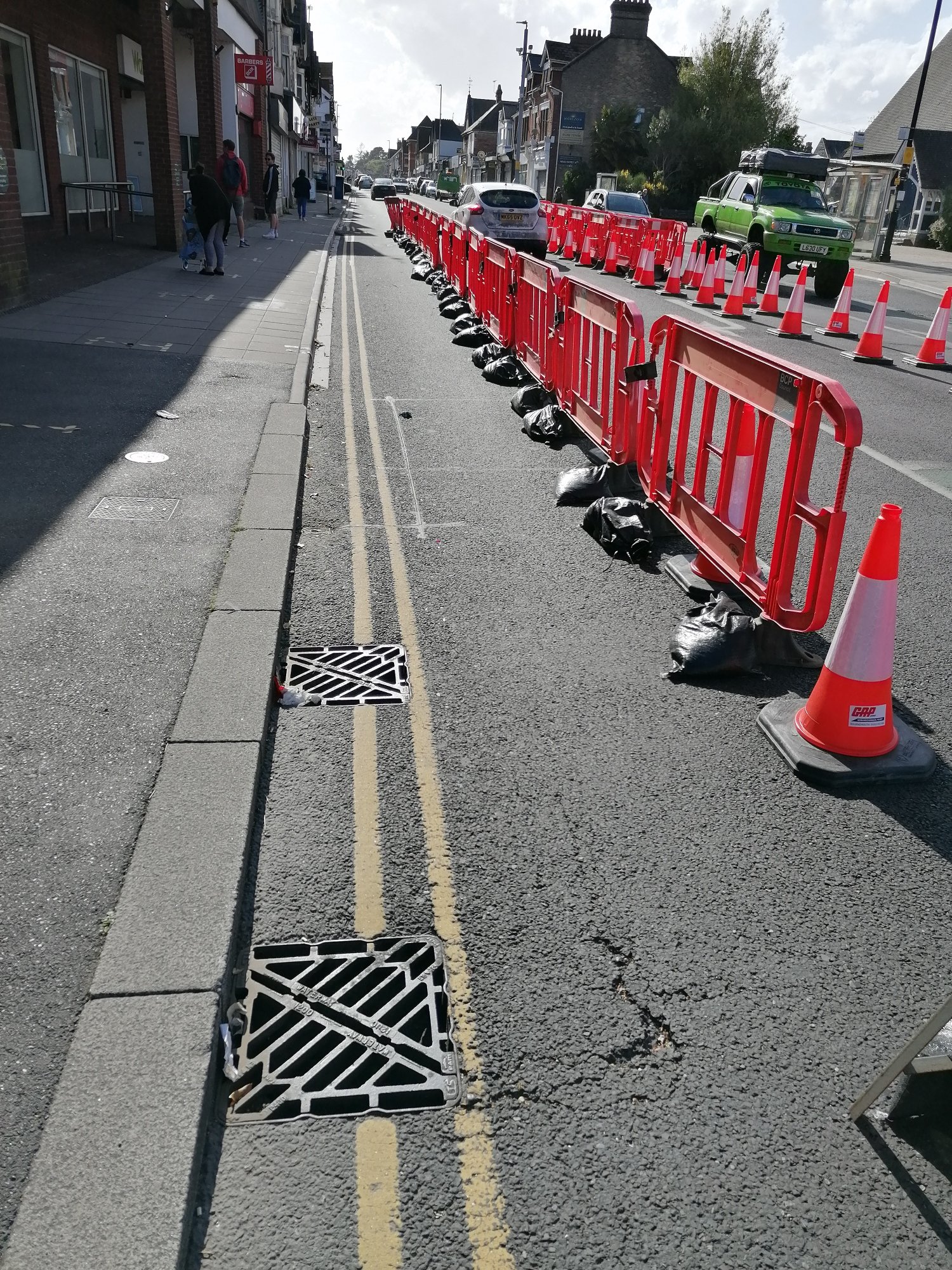 Around the corner on Sandbanks road at Evening hill, there is a new sign helping with the footway/ cycleway removal I talked about earlier– another section of road that could really benefit from protection, and something Ive been asking for since hosted by Poole Boro at St Johns house offices in 2009 in my tenure as Sustrans Bike It officer.  Well done to BCP for these first on the ground actions and thankyou, we look forward to much more. As the sun keeps shining the wheels keep rolling and I really think these families safety is worth more than a few car park space funds. 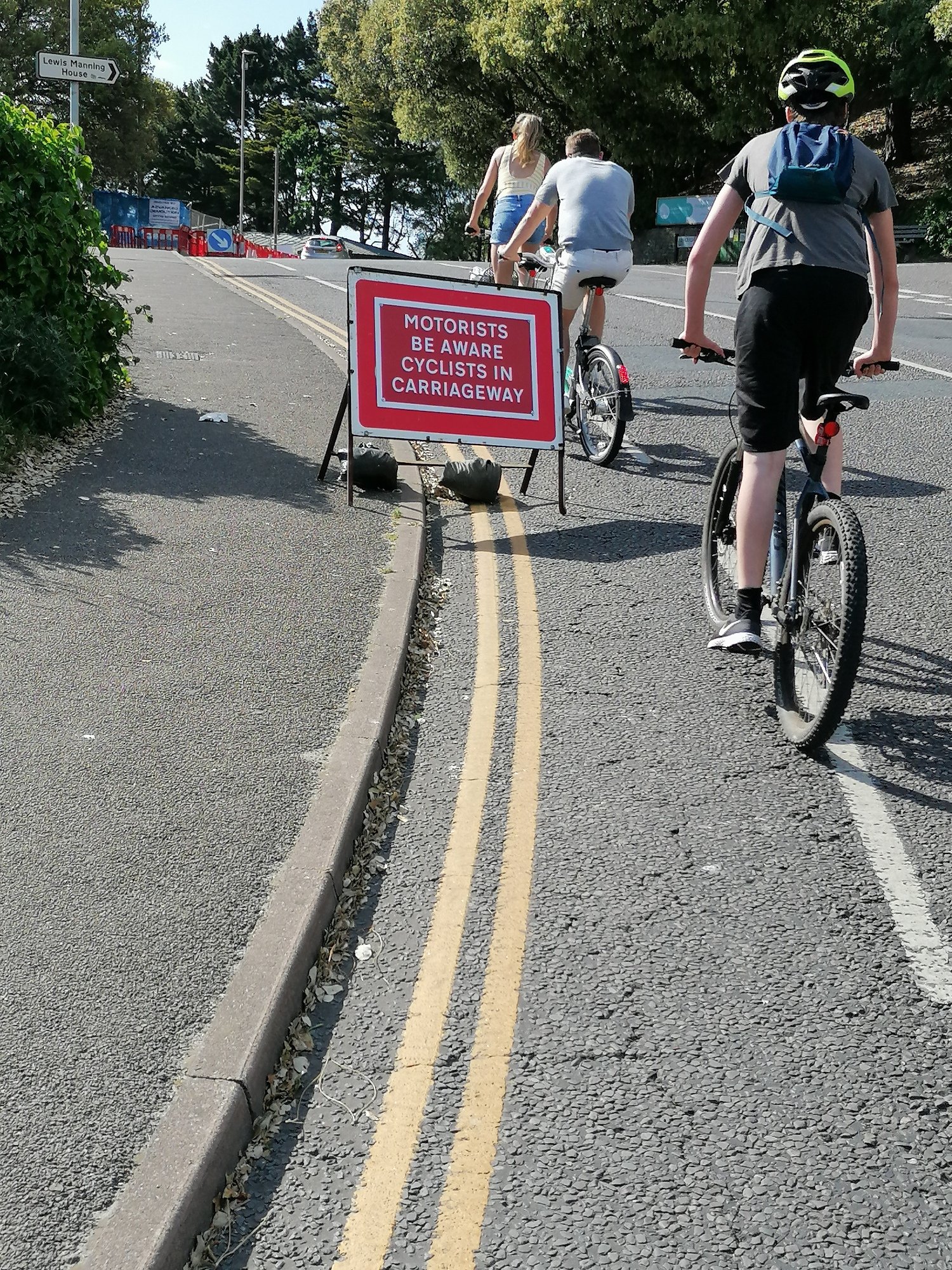 Probably helpful a little context for those that havent been following this whole era. Lockdown was 23 March, 07 April my first post on this BHAT web. A month later on May 9 Grant Shapps made announcement about funds   The amounts quoted since also changed and there still is no sign of the funds for Councils, given this its no surprise that many Councils with massive deficit in income over last 3 months arent making any changes to roads. If you have been following this era and Active Travel you might have also seen initiatives that have been made to actually consult residents.  Here is such an example by BANES .  I am reliably told that BCP are procuring such a consultation process right now, which is going to be essential for upcoming works. Recently communication from me by email to the leader and Transportation manager “Ive already been asking for 3 years for regular meetings with the officers in charge of road schemes, not just as and when, but regular input. It seems to me that its essential to the success of upcoming TCF work that we have these conversations, away from the noise of social media. Consultations on ideas like Low Traffic Neighbourhoods and the LCWIP plans that feed into TCF overall, the more in advance the better” this is the key point here, we are 2 months into a 3 year fund for building new cycleways as part of TCF – the designs MUST be in progress, so earlier engagement is essential before work starts. Please- the scenario of announcements on work linked to no prior consultation is just asking for trouble later when the loud voices against any change will shout louder than anyone with genuine interest in the subject.

Just briefly there is also the essential LTN guidance that engineers and planners use, Ruth Cadbury whos a GVT minister has asked Dept for Transport again for release of this, (Local Authorities Transport Note on Cycle Infrastructure (LTN) The current guidance is 12 years old….is it any wonder that sometimes it feels like officers are just making it up? Whichever field you work in I’m sure you can appreciate that staff having manuals to work from that are 12 years old is a recipe for poor quality delivery.

Onto todays partners- Dorset Cycling Network, Im very happy to include this piece from Dr Dawson, a visionary person that brought about my move to Dorset in 2008. I sat around a table with him as then Head of the P.C.T and all the local authority road staff, (many still currently in post)and he proposed the Schools Officer job- many voices were suspicious and fearful of the idea of more children cycling to school than there were already (2%) but we strode on- and I began a 4 year post of working directly with schools. Here we are pictured at a World Book Day event at Corpus Christi Catholic that I still work for, The school had gained their Silver School Mark award for promoting Active Travel. Hope you enjoy Adrians Piece.

“DCN Was started by Michael Evans in 1992- In the early days it was called Cycling in Wimborne. In those days there was very little for cyclists, no parking, no cycle lanes or cycle signposts. A meeting in a church hall was held and about 50 people turned up and in no time a campaign was agreed. A Chair and Secretary were a greed and a treasurer who would collect a £3 annual membership fee. A committee was formed and met frequently in peoples houses and pubs, and made some of the needs known to the appropriate councils. After about 2 years cyclists from other towns- Blandford, Dorchester, Ferndown etc started to come to the meetings having heard about the group and wanted the same thing. It was suggested they form their own groups and eventually it was agreed to form a network to help each other but each group doing its own local campaigning.

An early venture was for several groups to link with Friends of the Earth and 40 people walked their bikes along the prom at Bournemouth where cycling was forbidden. It blocked the route for car drivers getting to their beach huts. The group walked all the  way to the Poole boundary where a letter of thanks was presented to the Mayor as they allowed cycling. The following year Bournemouth changed the bye law in favour of cycling.

All this and more has been archived in our newsletters which are on the DCN website and copies are in the Dorset records office.

DCN now has groups spread across Dorset with Wimborne being the largest group of regular active cyclists. Most of us are retired and we have a few in their 80‘s.  At Christmas we have about 45 of us come to the Christmas party, which is about the number who cycle regularly throughout the year. Some of us do a bit of singing and we have Ukelele players as well- music can be sea shanties, country and western and reggae!

Our regular riders take in Dorset, Poole and Bournemouth. Regular Poole haunts include Upton Country Park, Salterns Marina, Cobbs Quay, RNLI, Wetherspoons on the quay and the seafront (not straight after). We are not the speeding cyclists.

Most of us are based around the Wimborne area and Poole. With Bournemouth and Christchurch being a bit further afield we tend to go that way in summer down to Tuckton tea gardens, Hengistbury, Mudeford and seafront.

The average number for a ride is about 15. Because we are a large group we tend to go to large places that can accommodate us, eg pubs, garden centres, large cafes like Wimborne square that have added cycle racks and made the natural cycling destination a key part of their business. The rides are 10-12 miles on some days and 20-30 on other days so you can mix and match if you want. Cycling speeds are leisurely with a distinct rise in speed since about 40% bought electric bikes! Cycling is only half what we do, the other half is drinking coffee, eating cakes, teacakes and bacon butties, we are experts on these menus.

We go out about 5 times a week not always as DCN and every time we must spend about £45 each so we put a good amount into the local economy over a year. When its raining we still meet for coffee and cake but no cycling, a friend said once said we spend more time eating than cycling.

About 3 times a year we spend a long weekend outside Dorset. We have been to Chichester, Somerset Levels, Marlborough and parts of Devon. Intense planning goes into finding the rides with an informal GPS group planning and sometimes reconnoitring the routes before we all descend on the place.

Over the past few years some of the group have become adventurous and we have enjoyed weeks in Holland, Belgium and Germany. Covid-19 has put paid to this years trips.

Most of us are not into active campaigning but some of us get involved and you can see this in the newsletter that appears 3 times a year. However we really enjoyed the cycling improvements from the work put in by the different councils particularly ham lane leading into Longham and the Broadstone and Poole improvements. Members / Participants are encouraged to suggest changes / repairs to the existing pathways or suggest possible new routes to the council for consideration. One example was near Broadstone Sports Centre where a lip in the pathway was smoothed after being advised to the council.

The group is particularly social. We have a WhatsApp group, we zoom once a week at the moment and if anyone is silly enough to tell us their birthday we like to eat cake or attend parties. We have raised money for cancer charities and attended coffee mornings as a cycling group. Apart from the coffee and cake we are seriously addicted to weather forecasts. We tend not to do politics but we do like to hear about all our ailments. On a serious note we try to keep in touch if people are particularly ill.”

Finally also last week some action by E.R at East Avenue roundabout, I declined involvement with this action, the location chosen to paint has been a teaching location of mine many times before, and the location of a womans death some years ago. Encouraging people into the hatched area is just exactly where drivers cut across due to the shape of the roundabout. Much better to wait for a gap in the traffic to enter roundabout, or if a quicker rider join the traffic stream and avoid anyone turning across your path.

There has been some interest on the FB about Play streets, if youre interested in this or anything you think the Forum should be supporting get in touch.