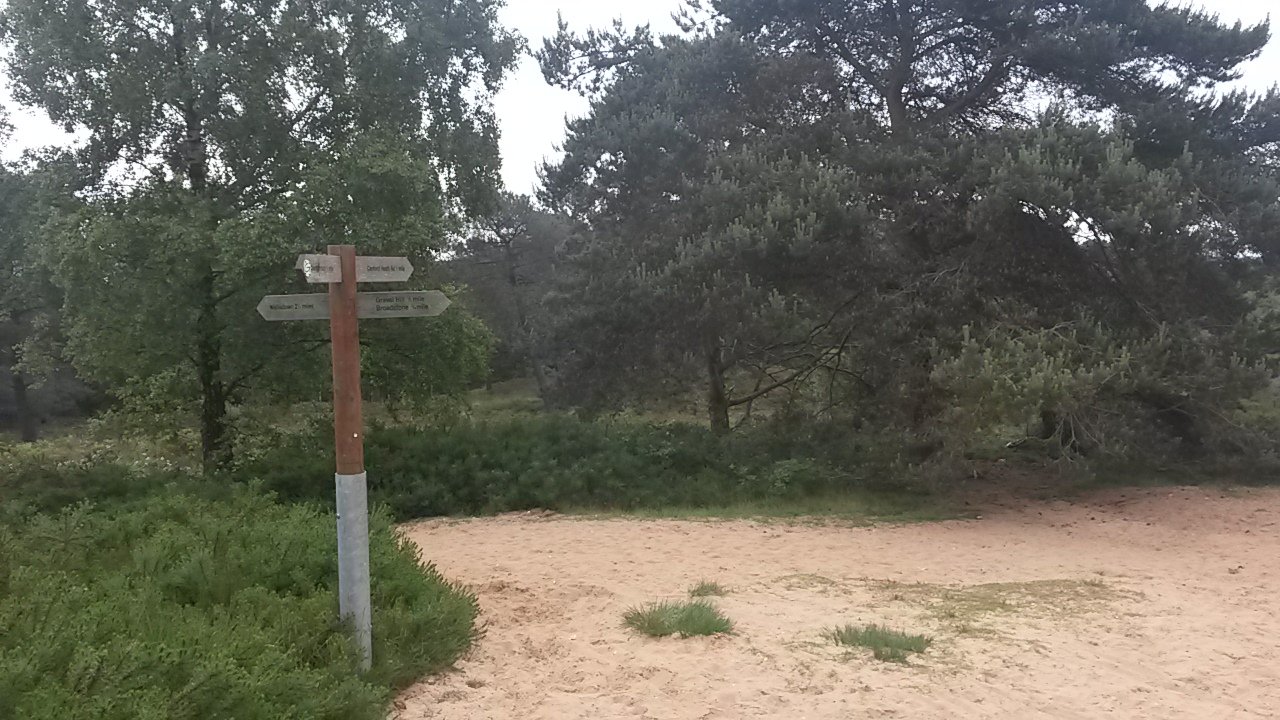 Here is the first of our user experience posts, If you are starting to explore by bike, returning to cycling during COVID era or just curious- Heres some tried and tested advice, Andy Storey and I both share the lifelong experience of Cycle commuting, he says:-

“Every job I’ve ever had has involved commuting to work via bicycle.

My working life started with a brief stint shelf stacking (to fund a new MTB) at Tesco, a 4-year apprenticeship at Siemens, a spell in the publishing industry, a decade in local government part of which meant a ride to Poole station prior to enduring the train and of course now, cycling to Prendas Ciclismo  every day, whatever the weather.

Most of the time I follow the same old route every day (Holes Bay, Poole Quay, Poole Park & NCN25), but when the weather improves, the Bourne Valley Greenway is a local jewel that is underused by many and allows for a better quality ride to work avoiding even more traffic and affording the user better air quality too.

Completed in 2004, the Bourne Valley Greenway (BVG) is a 7 mile often scenic route that starts from Broadstone and takes you all the way to Bournemouth town centre taking in Canford Heath, Talbot Heath, Coy Pond and Bournemouth’s Gardens and a few other local spots that you might not have come across.

My ride starts on the Castleman Trailway into Broadstone riding up the hill along Dunyeats Road.  The recent improvements by BCP Council were finished in September 2019 and are by no means perfect.  Whilst driver behaviour has certainly improved, several of the junctions have poor visibility, so I’d always advise riding on the right hand side of the shared path so you are seen earlier. 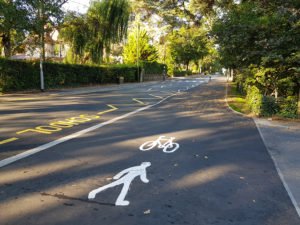 There are two schools situated on Dunyeats Road, so if you can, it’s worth scheduling your ride outside of the school’s start/end time rather than trying to ride up the hill along with 100’s of pupils!

If you happen to do this route in reverse, I’d recommend riding down the hill on the road as that is safer for both yourself and any pedestrians that you might have otherwise met.

Next up is Canford Heath, accessed via Poole Crematorium, allowing you to enjoy riding in one of the largest heathlands in Dorset.  It starts with a wonderfully extensive view of the surrounding area which is a joy to behold.

As well as the official route, there are numerous route choices if you wish to self-navigate your way by following the network of bridleways.  One of my favourites is a short sharp climb  that starts with poor traction finishing off with super-sticky clay at the top – fantastic stuff!

After the joys of Canford Heath comes a bit of urban travelling before the next heathland.  After descending from the Mountbatten Arms roundabout, you cross under the A3049 using an underpass that is often flooded.   So don’t be surprised if you get routed across the pedestrian crossing instead. 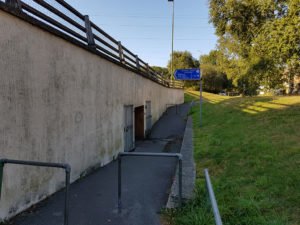 (Heres a video Jason made from on Canford Heath, down the hill and back onto the Greenway at St Brelades backroad, which mode of travel choice looks better to you?)

The BVG travels through Bourne Bottom, Alder Hills Nature Reserve and Talbot Heath that are essentially fragments of a once extensive heathland that spread from from Christchurch to Dorchester.

For the ride I recorded on Strava  I rode a beautiful Martin mountain bike from the 1990s, averaging just under 12mph, arriving in 40 minutes.  This route is not really about smashing Strava KoMs or QoMs, it’s about arriving at the centre of town using the best possible route.

At the start of this piece you’ll note I mentioned better air quality.  Thanks to my computing background, I’m a fan of data-led decision making in business, however there is a lack of accessible air quality data for the local area so I decided to create my own.

Thanks to a Plume Labs Flow personal sensor attached to my rucksack, I can measure Particulate Matter (PM1, PM2.5, PM10), Volatile Organic Compounds (VOCs) and nitrous oxides (NO2) which are caused by exhaust gases.

The three below show my routes using the BVG, the Holes Bay Road (both during CORVID-19 lockdown) and finally a Holes Bay route pre-lockdown for comparison.  These three, and in fact all my recordings show a significantly lower NO2 and overall readings for BVG, giving proof that this route is better for us compared to other local safe cycling routes.   It also shows how much different the lockdown has made to local air quality too. 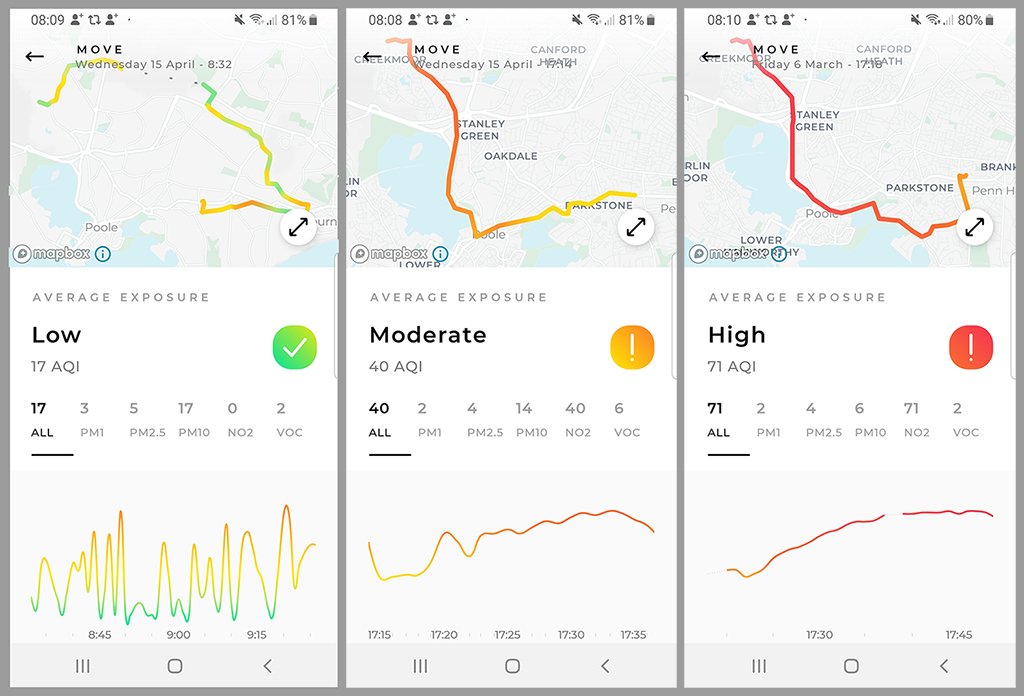 Let’s talk about Kissing Gates – a particular bugbear of mine.  Originally designed to allow people and not livestock to pass through, the numerous sets of kissing gates on the BVG are in place to prevent unauthorised motorbike access as enforced in law by the 1988 Traffic Act, Section 34. 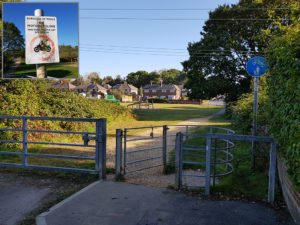 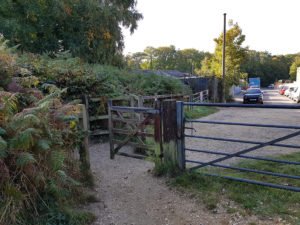 The problem with these gates is that they also prevent pushchairs, trailer bikes, some of the bigger cargo bikes and in some cases powered wheelchairs.  They also slow down journey times for us on regular bikes having to constantly stop and start adding unnecessary hassle.

I first contacted the then Borough of Poole in 2008 about removing these types of gates on the Castlemain Trailway and then the BVG, but needless to say nothing much happened to get them removed.

Thankfully, some resourceful soul has unlocked the padlocks on the gates which has dramatically improved access and thanks to CORVID-19, some of the local have jammed the gates open so they don’t have to touch the gates.  So we now have a live social experiment – maybe BCP will look at how we use these gates now.?

The worst of these gates is just before Coy Pond, an old wooden one that is difficult unless you are walking or have a nice, light bike.

Prior to arrival at Coy Pond, we ride through a modal traffic filter. The photos below show the difference in parked cars from the nearby industrial units before and during the COVID-19 lockdown again highlighting that small and inexpensive improvements by BCP could significantly improve the BVG. 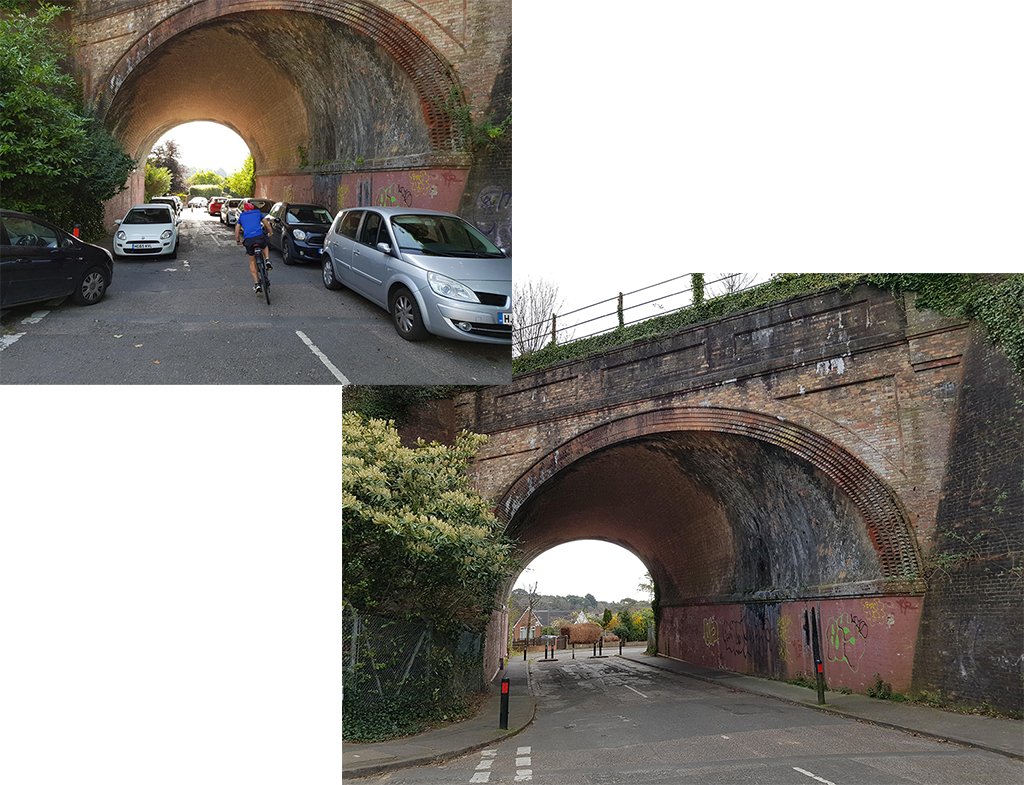 Coy Pond and the remainder of the route towards Bournemouth can get very busy during the weekends and school Summer holidays, so it is best to ride at the start or end of the day to avoid too much pedestrian conflict on the shared paths – hence it’s still perfect for the commute for most people.

The BVG crosses several roads on its way to the town centre and at every point you have to cross with care with no official crossing points provided by BCP.  The photo below shows a classic example of how adding some red paint is not a replacement for a Zebra crossing. 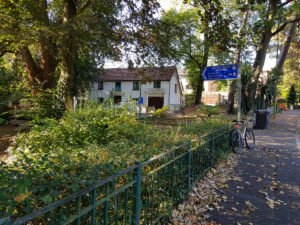 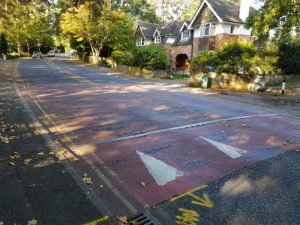 There is plenty to look at as you make progress towards the town centre.  The selection below shows the Victorian water tower, the more recent Upside Gallery  featuring some progressive urban art and graffiti and BH2. 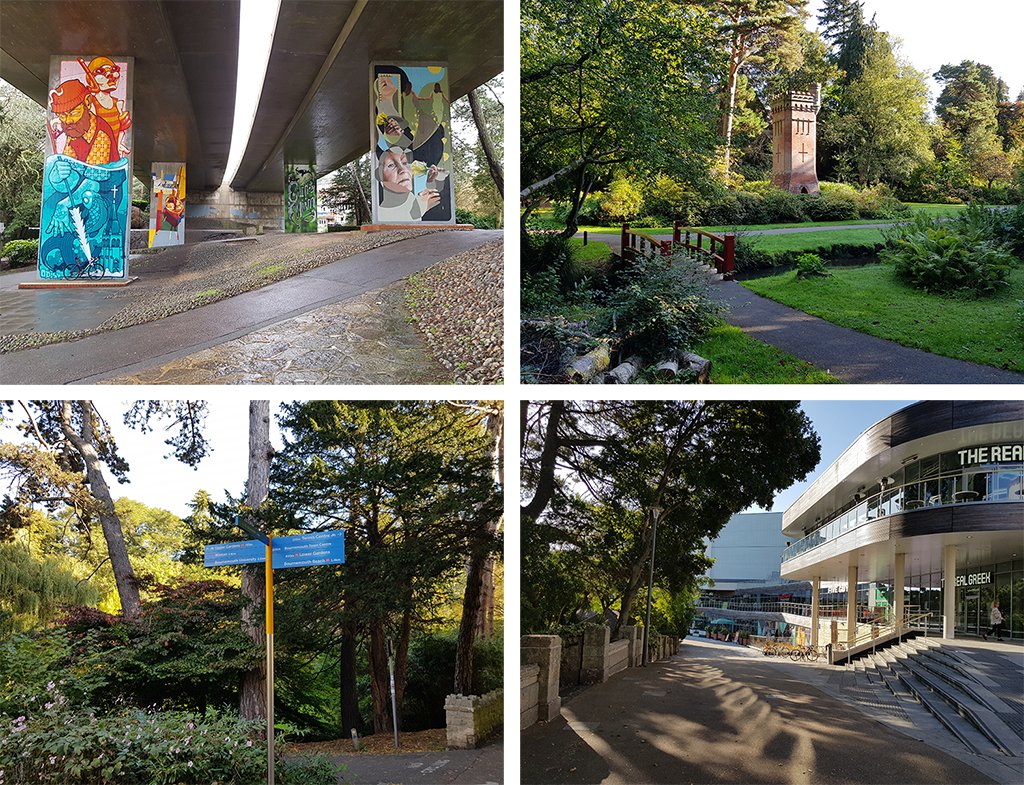 After travelling through a mixture of urban paths, heathlands we have arrived at Bournemouth Town Centre avoiding some truly awful traffic jams along the way!    My journey now continues along the prom to get to work travelling back towards Poole, but I hope this article has inspired you to try it out.    I can assure you this is 40 minutes well spent! 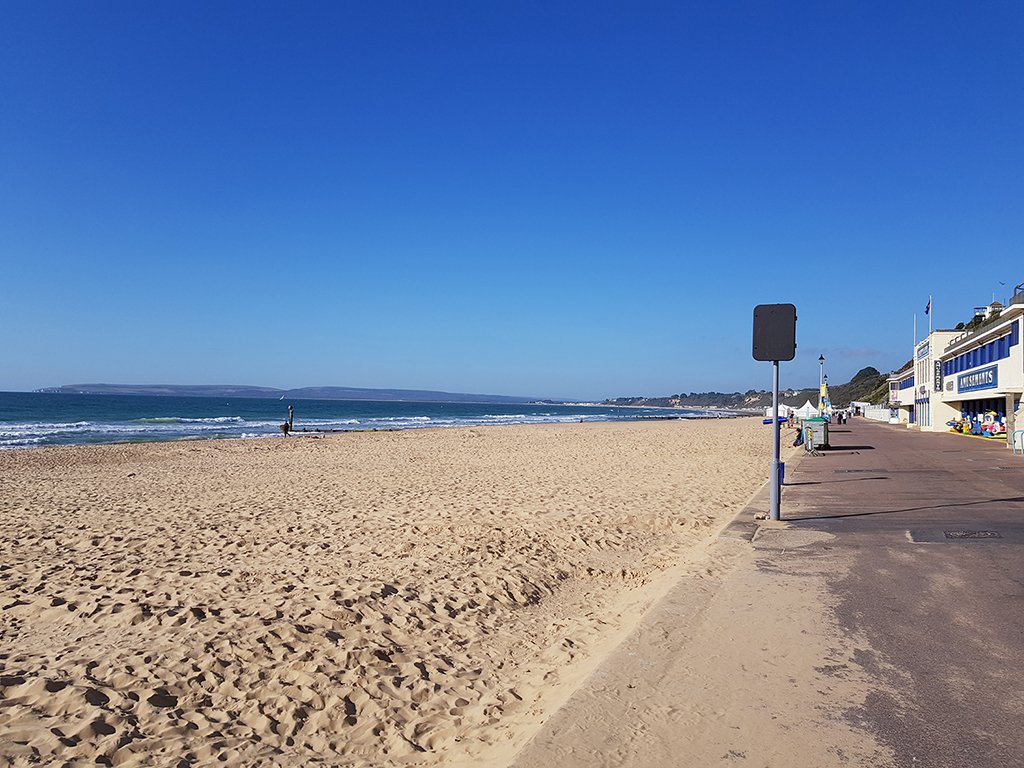 The gates of the type Andy mentions, was for a long time a barrier to entry on waterside at  Upton CP Poole, since removal of them there have been no reported incidents there. We are looking for more Experience posts so if you have great routes- get in touch, leave comments, links or email me chair@bhactivetravel.uk Thanks Jason